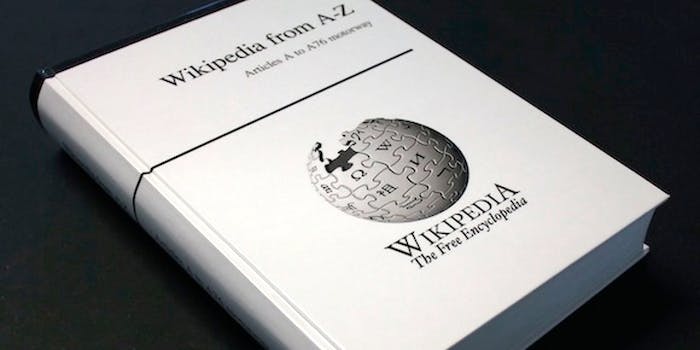 These guys are raising money for a 1,193,014-page paper Wikipedia

Group wants to turn Wikipedia into 1,000 volume set of encyclopedias.

With each passing year there are more and more people in the world with no recollection of life before the Internet. If you’re among that group, you may find it hard to believe that before Wikipedia became the world’s go-to reference tool, people used to dedicate whole bookshelves to a collection of musty old tomes with names like Britannica or Funk & Wagnalls.

So it’s no surprise the print encyclopedia has been replaced by an online version. Wikipedia has several advantages, like the ability to continuously and constantly update. It’s also not beholden to the physical limitation of page space.

That last one is particularly illuminating. To create a sense of just how much more information Wikipedia contains than a traditional encyclopedia, the folks behind an intriguing (and somewhat baffling) new crowdfunding campaign want to print the entire contents of Wikipedia – all 1,193,014 pages worth.

The Wikipedia Books Project, which recently launched a $50,000 fundraising campaign on Indiegogo to finance the quixotic publishing endeavor, is doing it as part conceptual art display and part promotional gimmick.

“We all know that Wikipedia is huge,” reads a summary on the project’s fundraising page. “The English version alone consists of more than 4 million articles. But can you imagine how large Wikipedia really is? We think the best way to experience the size of Wikipedia is by transforming it into the physical medium of books.”

Since the crowdfunding campaign began on Feb. 10, the project has raised just over $2,000. If they can raise the other $48,000 within the next 52 days, they plan to print the contents of English Wikipedia as a collection of 1,000 books of 1,200 pages each. If that doesn’t help quantify Wikipedia’s size for you, keep in mind that the first volume of this alphabetically organized reference set will only cover A through A76 Motorway.

Unlike traditional print encyclopedia sets, this one will not be hawked door-to-door by salesmen. The plan is to display the printed version in a case more than 32 feet long and 8 feet high at the annual Wikimania conference in London in August. If there is interest beyond that, the set may then go on an exhibition tour around the world.

This is certainly a visually impressive way to demonstrate the size of the world’s fifth most popular website, but who exactly would take on such a strange project?

It’s unclear if the crowdfunding campaign will be successful. It’s certainly not the most practical or important cause to donate too, but Wikipedia does have fervent–though dwindling–community of editors who might like to see this project come to fruition. Minimum donations to the the campaign are $5. All donor’s will see their name listed on the project website, but those who put in $25 or more will see their name published in the final product. A donation of $1,000 gets a logo of your choice printed on one of the book’s covers.

But PediaPress insist the true honorees of this collection will be the thousands of Wikipedians who created the content that will fill the pages.

“Containing the most volumes and edited by the largest number of contributors the printed edition will be a work of record breaking dimensions,” PediaPress said. “Furthermore the exhibit aims to honor the countless volunteers who have created this fascinating trove of knowledge in little more than ten years.”