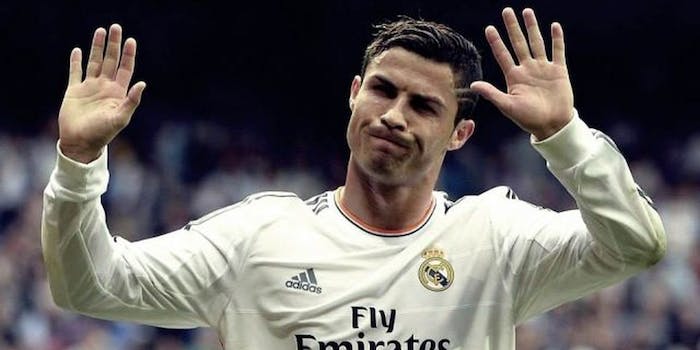 Real Madrid and Atlético Madrid have one of sports' most intense rivalries.

If you watched cross-town rivals Atlético Madrid and Real Madrid scrum Saturday during the second leg of the Supercopa de España, you enjoyed a 1-0 Atlético upset (winning 2-1 on aggregate), and more importantly a frustrated Cristiano Ronaldo appearing to punch Atlético centerback Diego Godín in the face off a set piece.

Ronaldo was not carded.

If you’re trying to track all of the weird European tournaments, the Supercopa is a trophy contest between the previous season’s Spanish soccer champs—specifically, the La Liga regular season winner and the Copa Del Rey winner. It’s essentially a meaningless exhibition that signals the start of another La Liga season in late August.

However, Atlético vs. Real is one of sports’ most intense rivalries. It goes beyond the field: Atlético v. Real is a class-driven rivalry that enjoys 100 years of hate. It is expertly, comprehensively explored in Simon Talbot’s 2006 FourFourTwo magazine essay, “More Than a Game“:

Real versus Atletico is power against the people; aristocracy against proletariat; right against left (even though both teams’ hardcore are on the far right); the swish new sanitised north against the real city of the south; glamour against grime; success against loyalty through thick and thin (mostly thin); arrogance against humility; the favoured against the persecuted; media darlings against unfashionable battlers; implacable winners against romantic losers.

But now Atlético is expertly managed by Diego Simeone and stretching every dollar to stay competitive despite having been raided by bigger clubs during the offseaon. Real Madrid, for its part, reacted to Atlético’s spring success by throwing money at World Cup breakout star James Rodriguez. Should be a fun year.

Photo via calciostreaming/Flickr (CC BY 2.0)