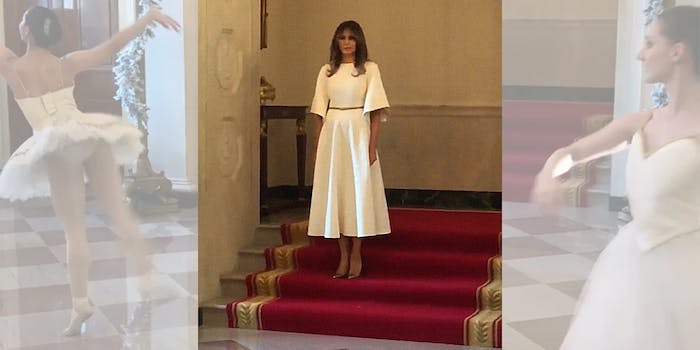 There’s something really creepy about this video of Melania Trump

The White House's holiday décor is scary, too.

Thanksgiving is over, which means that people—including folks at the White House—have already started celebrating Christmas. On Monday, the office of first lady Melania Trump unveiled the house’s decorations to visitors.

Just your average day covering FLOTUS and ballerinas at the White House… pic.twitter.com/BlCNR7OhwW

Well, enjoying is probably not the right word to use. People quickly commented on how uncomfortable Trump—or maybe it’s her body double?—looks in the video.

melania makes a lot more sense as a person if you just imagine she's a sim trapped in the real world https://t.co/vwJYQtTxlr

She's looking at them as if she just wandered into a nightmare from which she can't awaken. https://t.co/5SqaKAPV7x

And others thought the video was straight out of a scene in a horror movie.

can't wait to see the movie this scene is from https://t.co/fRKxYBBqyt

All this needs is a murder or a strange oblique flashback to be a Tarkovsky movie. https://t.co/1GauAfnO9K

It’s a scene out of a Kubrick film. You sorta feel bad for Melania. Sorta. https://t.co/E8beOQeWJ8

The internet also mocked the White House’s Christmas decorations. One photo showed a tree at the end of a very long, dimly lit hallway with shadows of plants creating a storm-like image on the ceiling, and it quickly became a meme.

Why does the White House Christmas decorations look like the lair of a Disney villain? pic.twitter.com/PMFoNkGjPC

why do the White House Christmas decorations look like Voldemort is about to come back pic.twitter.com/nF0GxCaxUq