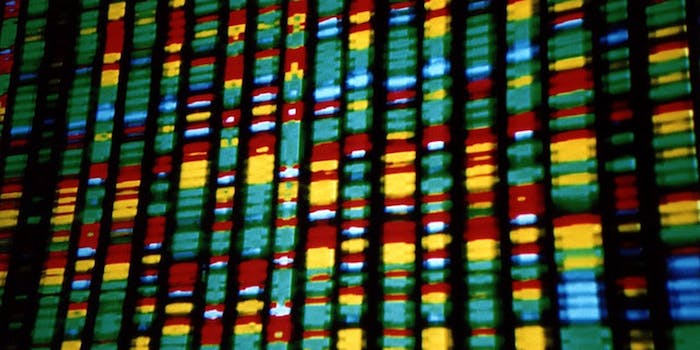 This makes so much sense.

A Craigslist poster in San Francisco has a lot on his plate this week: He’s a self-described billionaire being framed for an undisclosed crime, and needs your help with his defense strategy, which involves sophisticated genetic engineering. That’s where you come in! 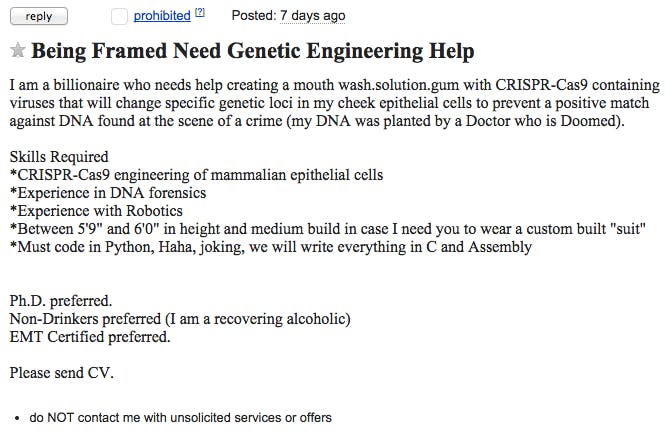 In case it’s not clear from this wacko posting, dude is trying to develop a mouthwash or gum that will change the “genetic loci” in his cheek cells so he can fudge a DNA swab test. Apparently “a Doctor who is Doomed” planted some of the supposed billionaire’s DNA at a crime scene, making him the case’s lead suspect, so now he needs to buckle down and develop some serious technologies fast. But he’s only one billionaire. He doesn’t have the PhD or EMT certification that you do, Craigslist job hunter.

Lifestyle reporter Marisa Kabas and I both reached out to see if we could be of assistance—the compensation is listed as “competitive, after all. We asked the poster how he made his fortune, why that doctor framed him (as well as why he’s doomed), and whether the police already have his DNA on file. The guy replied to us both within an hour, including only a Blade Runner quote:

You’re in the desert walking alone and you see a tortoise. You flip it over on its back and it’s struggling, wiggling its tiny legs but it can’t flip over, it just sits there baking in the sun. It needs your help but you’re not helping it, why is that?

In the sci-fi movie’s opening, that line is spoken during a psychological screening on a character who turns out to be harboring a big, dark secret. So, are we being screened? Are we both actually replicants? If we answer correctly, are our new careers/lives about to begin?

We replied to our mystery man with the next line in the scene—“What desert?”—but have yet to receive a response. Fingers crossed, though.

Photo by Andy Leppard/Flickr (CC BY 2.0)