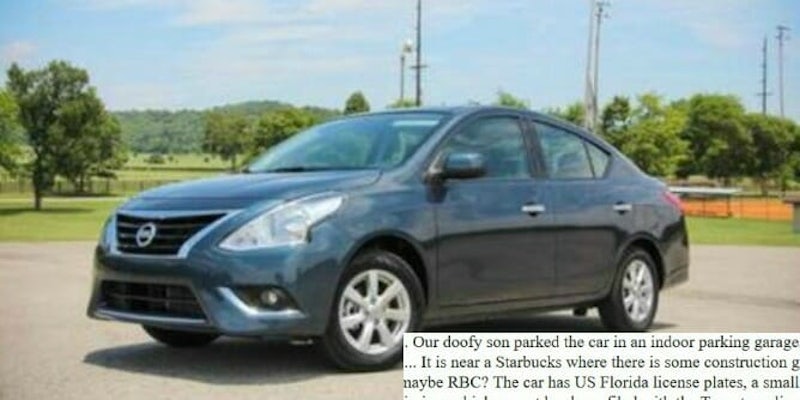 This story is sad but true.

Perhaps you’ve been there before. Basking in the glow after your favorite band has rocked your face off, you’re not entirely sure how to get home. Not because all your senses have been discombobulated by the show—chemically or otherwise—but because you can’t remember where in the hell you parked.

That was where a 19-year-old New York man recently found himself after a Metallica concert in Toronto. He knew he had parked at a garage a few miles away and took a cab to the Rogers Center for the show, but he couldn’t remember where that garage was located.

Naturally, Gavin Strickland’s parents—who live in Syracuse, New York—did the only thing they could. They hoped Craigslist would solve the problem.

In an ad that offered a $100 reward, they gave all the details they could on their 2015 Nissan Versa, writing the following:

[It] was parked within a $8 cab ride (about 2 miles) of the Rogers Center this past weekend. Our doofy son parked the car in an indoor parking garage, in the first floor (slightly lower / basement level) but that garage cannot now be located…. It is near a Starbucks where there is some construction going on. Also nearby is allegedly a strange spiral outdoor sculpture, and possibly a bank- maybe RBC? The car has US Florida license plates, a small Canadian flag affixed to the door frame, and a Bernie Sanders bumper sticker. A lost / missing vehicle report has been filed with the Toronto police. Please respond with photos of the car and specific location instructions to claim the reward.

“I love puzzles, I love challenges and escape rooms, all that. I read a few clues about where it could be and it honestly excited me,” she told CTV News. “Wednesday night, my boyfriend and I took his car out and we went for a drive. We started with every Starbucks with a construction zone and a bank nearby.”

Eventually, she happened upon the garage, turned a corner, and “there it was,” she said.

Now, the car is back in the Strickland’s possession, and we can only hope that his parents have dubbed Gavin forgiven.