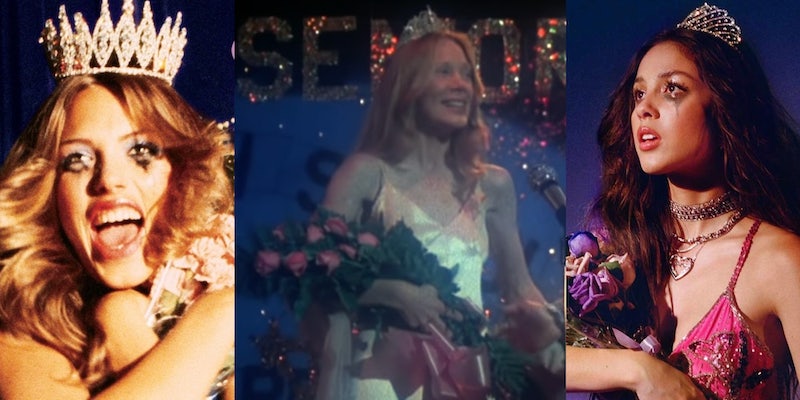 Courtney Love calls out Olivia Rodrigo for ripping off her album cover, but fans say she’s not original either

'Umm I’m pretty sure both of them took inspiration from Carrie.'

Courtney Love called out Olivia Rodrigo for seemingly copying the album art for Hole’s Live Through This, but some fans insist that Rodrigo was emulating the 1976 horror film Carrie.

Rodrigo posted a photo to her Instagram promoting Sour Prom Concert Film, a movie accompanying her debut album SOUR, which airs on Tuesday. The photo shows Rodrigo in a prom dress, crown, and smudged mascara. She captioned the photo: “since i never got to go to prom, I wanted to throw a little prom party with my fav ppl (you guys obvs)” along with details about the film premiere.

In an Instagram post reuploading Rodrigo’s photo, Love snarkily wrote “Spot the difference! #twinning!” in the caption and tagged Rodrigo.

Rodrigo responded in a comment on Love’s post, saying “love u and live through this sooooo much.” Meanwhile, Love responded to her comment by telling her where her favorite florist is located and anticipating an apology note.

Love continued to call out Rodrigo on Facebook, saying “It’s rude not to ask [for permission to recreate the photo].” Numerous Hole fans agreed that Rodrigo should have asked for Love’s blessing to pay homage to Live Through This, calling it “artist etiquette.” Many also praised Love and thanked her for the impact of the Hole album.

Love also responded to some of the Carrie comparisons made, calling her album art “original” and seemingly calling Rodrigo too young to have original ideas.

“And just to clarify? The Brian de Palma classic Carrie is another thing. My cover was my original idea. A thing you maybe have to actually live life to acquire?” she wrote in a comment

When one person indicated that the Live Through This cover wasn’t necessarily unique either, Love said “don’t [you] dare gatekeep me” and reinforced her statement that the art was original.

Upon hearing about the beef, many Twitter users argued that Rodrigo’s photo was paying homage to Carrie not Live Through This.

“Umm I’m pretty sure both of them took inspiration from Carrie. Courtney can’t be serious,” @takship tweeted.

One fan pointed out that Love was reported to have been inspired by Carrie when conceptualizing the Live Through This cover, citing an AnOther Magazine interview with the cover photographer Ellen von Unwerth.

“Courtney Love called me,” von Unwerth said in the AnOther interview. “We were on the phone for one hour. I didn’t say much but listened, and Courtney had the idea of re-enacting the scene of the movie Carrie, which I loved, too.”

It’s unclear if Rodrigo sent Love the flowers she wanted, but the Daily Dot reached out to representatives for both artists.