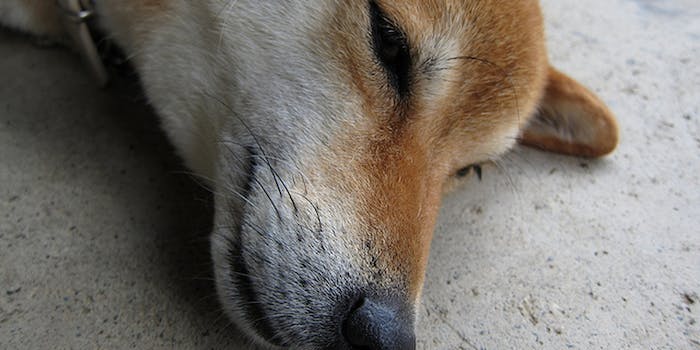 The Internet is recalibrating our minds, but the net results are still in doubt. Will our attention spans shrink? Will we value our virtual selves over our real bodies? Or will communication devolve to the coded, childish language of Socially Awkward Penguin and Doge?

In what may be the first instance of a person blaming their romantic difficulties on image macros, one redditor took to r/relationships to say that he was on the point of dumping his girlfriend due to her reliance on meme humor, especially in intimate contexts. If this is a tall tale—and we have a sneaking suspicion it is—it’s a dark and alarmingly plausible one. Emphasis ours.

My girlfriend doesn’t abstain from meme usage, even when we’re having sex. Whenever we spend this time together, she starts moaning doge memes like “such sex, wow” and it really kills the moment for me. Like really? Is that even close to appropriate? Maybe she wants to relieve the tension, but does she know when to draw the line? Even reading that over made me sick knowing that Chris is usually 100% serious about those things.

I tried bringing up her inappropriate usage of memes after my father died and she literally sends me advice animal memes that say ‘don’t be sad’ but my dad just fucking died could you be more sensitive and not send me memes? I said that straight to her face yesterday and she started crying, and I feel awful but it was just really irritating for me.

Basically, every time I bring up her habit, guess what- she just brings up memes! It’s impossible to fight with her reasonably and I’d hate to end our year long relationship over something so trivial like this and I need advice.

Troll with a burner account or not, “needtovent446” kept up appearances in the thread, thanking those who took his problem seriously. Among the more thoughtful responses were a poignant recollection of an ex-boyfriend whose emotional range didn’t extend past web humor and suggestions for how to gently express a growing unease with someones meme addiction.

Then, of course, there’s this idea, to hand out physical downvotes when her meme references are a turnoff:

Photo by Yuya Tamai/Facebook (CC BY 2.0)