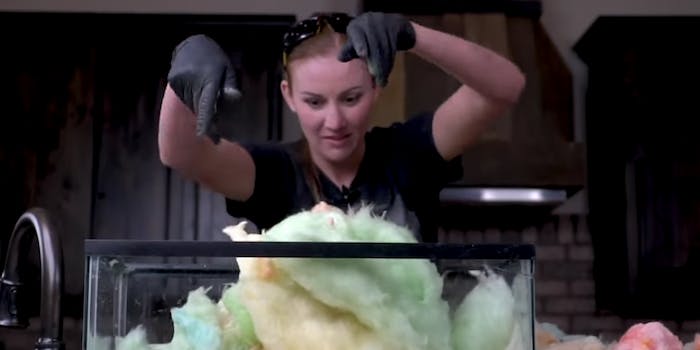 This cotton candy dissolving in water meme might represent your life

A captivating video of cotton candy dissolving in water has the internet transfixed.

Could a copious amount of cotton candy dissolving in a tank of water represent your life? On the internet, anything is possible.

A now-viral video features two people hurling a ridiculous amount of cotton candy into a tank with water. The fluffy delicacy simply dissipates as soon as it hits the water. The clip is so oddly satisfying to watch that it has attracted over 13 million views on Twitter.

The video is not even accompanied by a funny or genius caption. It simply reads, “This is what happens when you put cotton candy in water.” Nothing special, right?

Yet, Twitter users saw meme potential in the water’s ability to serve as a never-ending cotton candy pit.

“This is what happen with your money when you play Yugioh,” one Twitter user wrote.

This is what happen with your money when you play Yugioh.

Some tweets took a realistic and mildly depressing, yet still hilarious, turn.

“Me putting all my time and energy into a toxic relationship,” one Twitter user wrote.

Me putting all my time and energy into a toxic relationship

What my brain does with compliments. https://t.co/25NvUNbHb0

That’s cool but there’s still no clean water in Flint,Michigan

Some remained unimpressed, while others found the captivating video unbelievable.

“I thought it was common knowledge that cotton candy dissolves when wet,” one user wrote.

i showed this to my sister and she said “i don’t believe it” THE FUCK??? just watch the video pic.twitter.com/MdbvnbJhp5

And now we have koolaid. Drink up. pic.twitter.com/PylvCMibLU