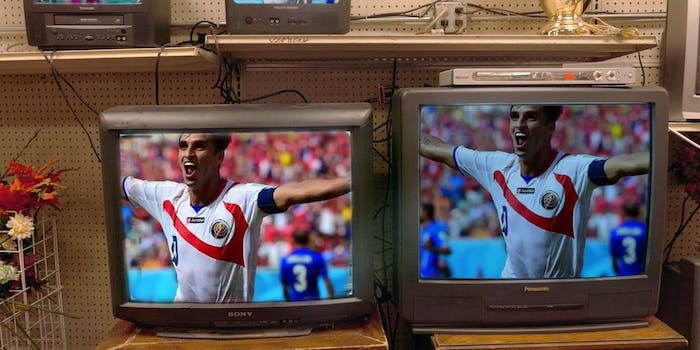 How tiny Costa Rica upset Italy at the World Cup

A Bryan Ruiz was all it took to push Los Ticos past the Azurri.

Costa Rica entered the World Cup as a footnote—drawn into Group D alongside three former world champions Italy, England, and Uruguay. It finished second in North American qualifying behind the United States, but we scoffed at the seemingly meager feat. After all, CONCACAF is among the softest soccer contingents and Costa Rica’s groupmates are staffed by leading men that populate the best leagues in Europe.

Yet Los Ticos buried Uruguay in their opener Saturday. Fool’s gold, we thought—blame it on Luis Suarez’s attack-changing absence and the fact that Uruguay is a thin, aging team.

Friday Los Ticos pressed Italy, arm wrestled for possession, forced the most decorated goalkeeper of all time, Gigi Buffon, off his line and into the path of dangerous breakaways. Costa Rica stormed to the biggest upset thus far at the World Cup, winning 1-0, eliminating the English in the process, finding only its fifth win ever at the World Cup (Italy has 45).

How do you explain that?

Costa Rica had a chance to finish first during World Cup qualifying but faced the United States in a Denver snowstorm and, out of its element, lost a controversial game.

Discouraged and fuming, it went on to beat Sam’s Army at home and then go out of its way on the last day of qualifying to curb stomp Mexico 2-1.

This is a tightly knit side with momentum and confidence.

Hard work and dedication matters, sure, but it’s a lot more helpful to field blue chip prospects. Costa Rica has difference-makers. Keeper Keylor Navas plays professionally in Spain at Levante but is expected to sign with a more prestigious club after the World Cup. He’s been linked with Italian Seria A darlings, Napoli. Let’s hope they still want his services after today.

The U.S.’s domestic league, the MLS, sells aged stars and the notion that it molds fresh American talent. The overlooked third heat in the MLS’ talent pool is Central Americans. Mexico’s Liga MX aggressively prioritizes its traditions (for example, you must be Mexican to play for flagship club, Guadalajara) and that means cultivating Mexican talent above all else.

In the MLS, the best talent from El Salvador, Guatemala, Costa Rica, Honduras, and Panama has a competent, expansive, modern league with steady paychecks and upward mobility.

Costa Rica’s roster boasts three players from MLS (Giancarlo Gonzalez and Waylon Francis of the Columbus Crew, Roy Miller of the New York Red Bulls), and only one non-backup keeper from its domestic league.

Again, like Suarez, you can ride a hungry dolphin across the river during these short tournaments. Costa Rica’s ticket is Arsenal striker Joseph Campbell. The 21-year-old winger is having a breakout tournament, having scored against Uruguay and terrorized Italy’s back line.

Campbell should have drawn a penalty kick during the first half of the Italy game when, on the break, he was brought down from behind in the box.

Whereas Spain was able to win the World Cup with four straight 1-0 scorelines during a dry-spell tournament in South Africa four years ago, Brazil 2014 is about attacking soccer that emphasizes possession over methodical counterattacks.

The crowds are overwhelmingly pro-American (check the Mexicans rooting on their North American paisanos Friday against Italy), and it’s a roaring collective performance from a hungry side of the world that hasn’t crowned a World Cup champ in 12 years.

North and South American countries in Brazil are 12-3-2 thus far—with one of the losses factoring in Uruguay dropping to Los Ticos.