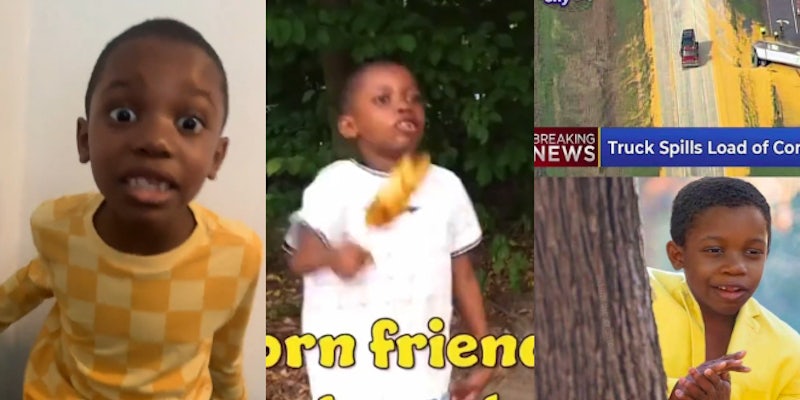 A pure interview about corn spawns a late-summer meme.

First there was the video, then the song, then the dance. Now Corn Kid is a meme.

In the tradition of Zombie Kid, a young boy named Tariq has become a viral star simply for liking something and saying so publicly. The most popular video of him exclaiming “It’s corn!” and discussing its intricacies and flavors was posted on Aug. 4 by the meme account Doing Things, and it has more than 20 million views.

But it is originally from the account Recess Therapy, a kid-centric web series hosted by Julian Shapiro-Barnum.

Schmoyoho, the musician behind the viral “Chrissy Wake Up” song, also gave Corn Kid his own anthem. That clip has more than 57 million views, and the song has been used in more than 300,000 TikToks.

And now there are Corn Kid memes.

With all this viral cache, Tariq has now made the jump to Cameo (as “Corn Kid”) and collaborated with Chipotle.

Of course, people are getting protective.

Yesterday, Recess Therapy announced that the “official” song is now a collaboration as well, and that proceeds are going to be “split with Tariq and his family.”

@recesstherapy Hey folks! We’re so excited to announce that, in partnership with Tariq, his family and @schmoyoho — we’ve launched “It’s Corn”, the official song of this crazy corntastic moment we all created together! All proceeds are being split with Tariq and his family. So, please support and give it a listen! It’s streaming everywhere💕🌽 #fyp #corn #spotifynewmusic ♬ original sound – Recess Therapy