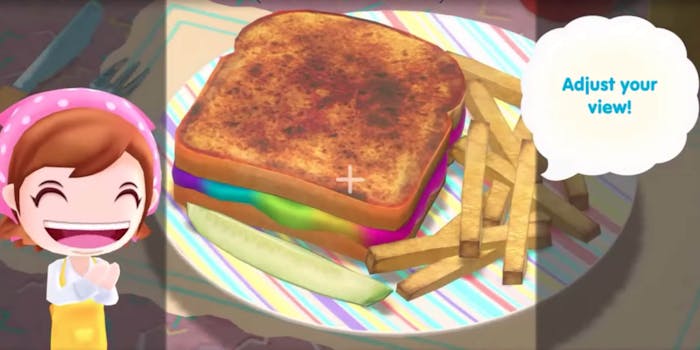 Cooking Mama’s return whips up a fresh batch of memes

A trailer for Cooking Mama: Cookstar leaked Tuesday, exciting many fans about the game’s release.

Cooking Mama: Cookstar will be coming to Nintendo Switch, along with Animal Crossing: New Horizons, in March.

The original Cooking Mama, a cooking simulation game, was released in 2006 for the Nintendo DS handheld console. For adults who grew up playing the game, the release’s nostalgia factor has already whipped up a slew of memes.

“Cooking Mama made a gay sandwich what a time to be alive,” Twitter user @PrinceofXianLe wrote of a rainbow-colored sandwich featured in the trailer.

Twitter user @brianNpikachu shared a meme of a scared cook who almost burns down a house while cooking french fries.

“Me playing the new cooking mama: cookstar,” they wrote.

Another shared a Master Chef Junior clip of a young chef being disheartened by the sight of her edible sculpture collapsing.

The game will include improved graphics and more than 90 new recipes, according to the trailer’s description. A vegetarian category has also been added, and the game will now support up to two players. Instagram-worthy recipes, such as “unicorn food,” have also been added.

According to Polygon, the trailer was initially leaked to Nedgame, a Dutch online gaming store. After the trailer was pulled, it was reuploaded by several YouTube channels.