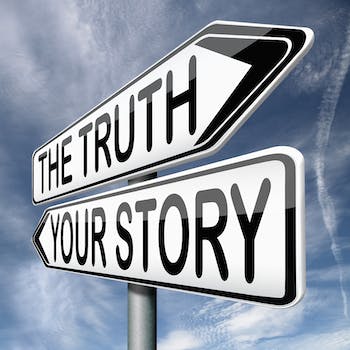 When it’s OK to lie (in online dating)

Yes, sometimes it is. Here's when.

A friend of mine recently asked me a fabulous question: What is better to conceal than reveal in an online profile? Is it acceptable to cover up baldness, extra weight, kids, divorces, vices?

In a way, this is very personal stuff. Everyone has his or her own standards for honest living and dating. Who am I to say?

Some lies do seem more innocent than others. I might not dismiss a guy on a slight height difference, though I’ll be annoyed that I wore my heels that night.

If it’s true that 81% of online daters lie, what is it OK to be dishonest about?

Here’s what I think: it’s not right to blatantly lie, but you can withhold the cold, hard truth—sometimes.

So the question is, when? Let me break it down.

When it comes to physical traits, you can withhold a little. Why give someone a reason to dismiss you before they’ve even met you?

If you go an inch taller, only share above the waist pics, or exhibit photos of you in various hats (we know you’re bald), I’m going to let that go. If you are grossly exaggerating—cut it out! You are going to shock and awe your date. In a bad way.

Did you recently lose your job, a parent, or your livelihood? Don’t mention it. No, really, don’t. This is certainly information you might want to share in the initial stages of dating, but not something that you want to advertise to the world. Best foot forward, chaps. Stick to the positive.

For some odd reason, certain online daters feel the need to share bad things about exes. “I like outdoorsy girls. My ex-girlfriend wasn’t interested in hiking and camping.” Oh, really? Is that why you two broke up? Of course not, unless you permanently live off the land. No need to talk about past relationships (including marriages), or really any past experiences. Get into the present and write about what you want now.

*Exception to the above rule: Your past may have led to children. In that case, you should mention them. It’s creepy if you don’t.

Are you a twice a week social smoker or a once a month marijuana dabbler? Forget about it. Even people who are super-anti whatever mild vice this might be for you probably won’t care if you do it only occasionally or only with certain friends. I wouldn’t worry about describing your substance habits unless they are excessive. Your date probably behaves the same way.

There you have it—my permission to be slightly dishonest! Feels dirty, doesn’t it? Don’t go too far, my friends. Be brutally honest on in-person dates. In between those, why don’t you have a think about where your personal standards and dating boundaries lie on lying.

Because as André Malraux put it, “Man is not what he thinks he is, he is what he hides.”