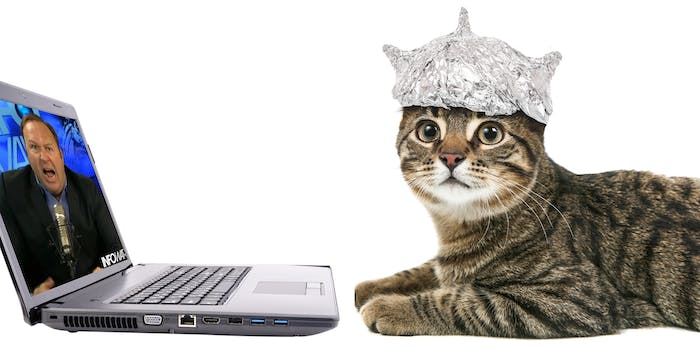 The 9 most popular conspiracy theories that continue to live on

What do you believe?

Paranoia is a hell of a drug. According to research from the University of Chicago, at least 50 percent of Americans believe in at least one conspiracy theory.

Conspiracy theories vary in subject but are ultimately rooted in the idea that there is some singular enemy to blame and that life is not essentially a confusingly chaotic Kafka-esque nightmare of accidents and opportunism.

In a simpler time, conspiracy theories were generally harmless and somewhat amusing “what if” thought experiments. Following the toxic 2016 presidential campaign, though, misinformation and fake news became a huge factor. Massively trafficked social hubs like Facebook and Google were unable or unwilling to delineate between fact-based journalism and fanciful lies masquerading as news, leading to a renewed examination of what role conspiracy theories play in the public consciousness.

Both Google and Facebook recently announced new policies to combat fake news, meaning these batshit theories not only had legs but are highly trackable. So, with that in mind, let’s take a look at the most prominent conspiracy theories that’ll keep you up at night wondering “what if?”

Did George Bush knowingly allow the attacks on the World Trade Center to happen? That’s the idea behind this prevalent theory, which supposes that the newly-elected Bush administration looked the other way when presented with evidence of an imminent attack from al Qaeda operatives in order to advance their agenda to invade Iraq.

A key aspect to the theory is “jet fuel can’t melt steel beams.” Conspiracy theorists believe the towers fell as a result of a controlled demolition and not because they were hit by commercial passenger planes.

The civil engineering community has widely rejected these ideas, but that hasn’t stopped speculation that the attacks on September 11th were somehow not what they appeared. Or maybe it’s because, as David Icke posits, it was all orchestrated by secret imperial Reptilians.

2) Chemtrails Are Controlling Your Mind

Ever look up in the sky and see an airplane and notice the white vapor trails following behind? Ever wonder if those trails were evil?That’s the idea behind “chemtrails,” the aggressive belief that not knowing things is somehow more accurate than actual science. The belief is that the government is spreading sinister chemicals across the land in order to influence your thoughts and behaviors.

The scientific community routinely dismisses these claims, explaining that what you’re seeing is merely condensation caused by the combination of water vapor in aircraft engine exhaust which, when combined with the low ambient temperatures at high altitudes, creates the trails of condensation, or “contrails.”

You know how Neil Armstrong was the first person to walk on the moon? This theory posits: what if he didn’t? What if instead the whole thing was a deleted scene from 2001: A Space Odyssey?As the theory goes, back in 1968, Stanley Kubrick was in post-production for his masterpiece space film when he was approached by the US government to help them direct the Moon landings. America was in a time of crisis in the late ‘60s: There was tons of social unrest, the Cold War with the Soviet Union was intensifying, and President Kennedy had been assassinated in a parade in Texas only a few years earlier. So, although the technology wasn’t ready for a real Moon landing, the masters of illusion in Hollywood would help fake it to give the country a reason to unite and cheer.

Proponents of this theory point to a few things as evidence. One, that the American flag is waving on the Moon even though there is no wind in space. But the scientific supportive argument for this states that when the flag is unfurled, it moves as the flag pole is inserted into the ground, giving the impression of blowing in the wind. Another piece of evidence is that there are no visible stars in the pictures taken by the Apollo astronauts from the Moon’s surface. But again, this has a reasonable explanation: The landing took place during lunar morning when the Sun shone brightly, meaning the stars were not bright enough in the light to be captured in the photographs. And so on, and so on.

Such as it is with conspiracy theories. They all sound kinda believable at first, but then dorky ol’ science has to barge in with all its annoying “facts” and ruin the party.

Do aliens live among us? Is the truth really out there?!People have been wondering if the government has discovered alien life and rudely not telling us for decades, largely fueled by the supposed crash of a flying saucer in Roswell, New Mexico in 1947 and its subsequent cover-up in Area 51. Because both events were shrouded in such secrecy, conspiracy theorists concluded that the US government was attempting to keep the truth about aliens out of the public for fear of causing a widespread panic.

In the 1990s, however, it was revealed that the “unidentified flying object” was a surveillance balloon from Project Mogul, a top-secret government project intending to spy on Soviet nuclear activity using microphones on high-altitude balloons.

Once again, the truth is way less interesting.

5) JFK Was An Inside Job

On November 22nd, 1963, President John F. Kennedy was murdered by Lee Harvey Oswald in Dallas. But is that what really happened?The Warren Commission concluded that Oswald acted alone, but suspicions that the assassination must have been more intricately plotted have persisted. How could Oswald have acted alone when the bullet damage exceeded the number of rounds fired? Did he fire a “magic bullet” or, perhaps, was the Warren Commission covering up a darker truth?

In fact, in 1979, the United States House Select Committee on Assassinations concluded that Kennedy was “probably assassinated as a result of a conspiracy” although they didn’t identify who the conspirators might be.

Speculation on who might have ordered the assassination and who else might have participated besides Oswald have been ceaseless for over 50 years. In 2003, a Gallup poll revealed that 20 percent of Americans believed Lyndon B. Johnson, who succeeded Kennedy following the murder, was involved in some way. Others have suggested the Mafia, the KGB, or the CIA would have wanted to take out JFK.

According to this theory, Paul McCartney died in a motorcycle accident and was replaced by an imposter shortly before the release of The Beatles’ iconic album Sgt. Pepper’s Lonely Hearts Club Band.The idea is supported by “clues” supposedly left for fans by the rest of the band. Most famously, at the end of “I’m So Tired” it sounds like John is mumbling something—and if you play the record backwards, it sounds quite distinctly like “Paul is dead, man, miss him, miss him.” Other clues sparked fans imaginations, too, like the cover of Abbey Road featuring Paul walking out of step with the others and barefoot, which supposedly indicates he had passed on.

If Paul did die, then his imposter has really sold his true identity quite short—since 1967, McCartney has been the most successful pop songwriter in world history, which seems like a lot of work to not get credited for.

Tupac is still alive. Elvis lives! Did you know Andy Kaufman faked his death as one big final prank? And Kurt Cobain is still out there somewhere.It can be hard to believe a beloved celebrity could endure such an ignoble end as death, so some people prefer to not believe it at all. Certainly, it would take a lot of work to cover up a fake death of any kind. Forging legal documents sounds easy enough but actually carrying it out is a whole other mess. Not to mention, as a celebrity with a heavily-marketed image, enjoying a small amount of sunlight anywhere would likely lead to your cover being blown.

Despite the illogical aspects of any celebrity being able to fake their death and enjoy a new life in anonymity, it’s still fun to believe and that’s why this conspiracy theory persists.

8) The Illuminati And The New World Order

The Illuminati is the idea that there exists a secretive group of elite power players on a global level, from politicians to business leaders to celebrities, all working behind the scenes of governments to push forward a “one world government” globalist agenda. Depending on your specific dosage with this belief, the Illuminati is everyone from George Washington to the United Nations to Beyoncé to George Soros. Their goal is to ruin your life and control it, for some vague reason.Not surprisingly, this conspiracy theory originates from right-wing nuts, particularly the hardcore militarily anti-government types and fundamentalist Christians who are convinced the arrival of the Antichrist is around the corner. That’s may be why, if you ever read anything from Illuminati believers, there’s generally a strong whiff of anti-Semitism in there, implying or outright accusing Jews to be “running the media and the banks.”

There’s a lot of fear of “the other” in this belief, and it’s tricky to disprove the Illuminati through hard facts because the belief is essentially: “what if we don’t know what we don’t know?” which quickly devolves into “what if they are out to get us?” It’s basically a boogeyman for adults.

The appealing thing about believing in this conspiracy theory is it goes so well with all the other ones, like a pair of good blue jeans. After all, if there is a secret society controlling everything, then that means the Illuminati are behind everything—9/11, the fake moon landing, chemtrails, who knows!

Conspiracy theorists don’t think their beliefs are crazy. They think they’re the only enlightened ones, and feel the need to share their newfound wisdom via obscene emails with subject lines like “FWD: FWD: FWD: FWD Obummer a Muslim???”Ever since Barack Obama entered politics, suggestions that he is not a “true” American have been suggested by his opponents. From as early as his campaign for the U.S. Senate in 2004, the paranoid have accused him of secretly practicing Islam or claimed he is the Antichrist, despite him having been a member of the Trinity United Church of Christ since 1992.

This theory intensified during the 2008 Presidential election when conservative talk radio hosts jumped on the bandwagon eventually spawning the “birther” movement, culminating in President Obama displaying his actual birth certificate to quiet detractors that insisted he was born in Kenya and not Hawaii.

And now the loudest leader of the birther movement has been elected President of the United States. What a country.