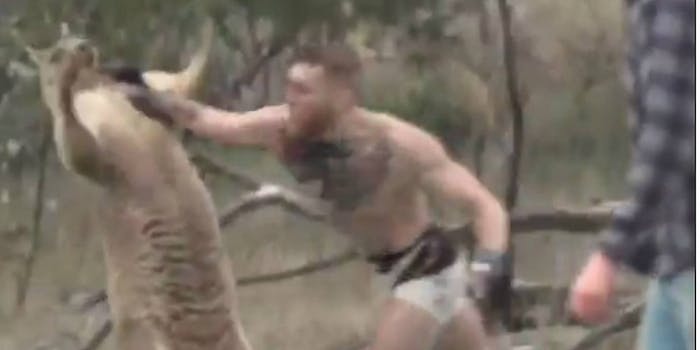 It does not end well for the marsupial.

Tens of millions of people have watched this Australian man punch a kangaroo to save his dog from being choked out by the marsupial.

Turns out the tale has a tragic backstory, and though the man, Greig Tonkins, has taken some condemnation for punching the animal after the kangaroo had let go of his dog, he’ll get to keep his job as a zookeeper.

He certainly didn’t finish the kangaroo with just one mediocre jab to the face, a punch that surprised the animal but certainly didn’t put him in danger of losing the fight. And leave it to some heroic soul to insert Conor McGregor—the biggest star in the UFC—into the situation to let him have a crack at it.

Luckily, the referee was there to break up the beat down. Otherwise, McGregor might have retired that kangaroo from the fight game altogether.