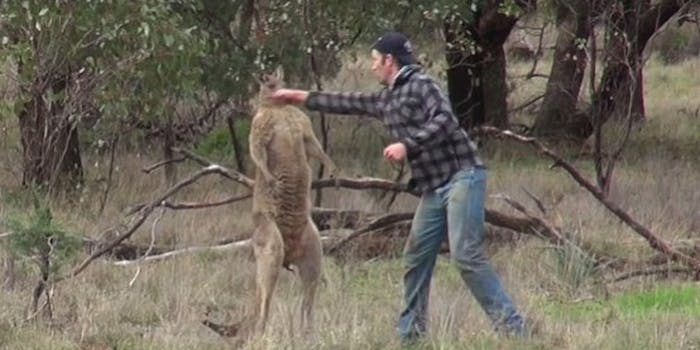 The man who punched a kangaroo has been fighting to keep his job.

The strange saga of Grieg Tonkins, the man who punched a kangaroo, is drawing to an end. The Taronga Western Plains Zoo in Dubbo, New South Wales, has confirmed that Tonkins, 34, will keep his job as a zookeeper.

To quickly recap, a video surfaced over the weekend of Tonkins stunning a kangaroo with a right-hand punch to save his dog, Max, while on a boar-hunting trip. It was later discovered that the trip to Condobolin, New South Wales, occurred in June and was for his close friend, 19-year-old Kailem, who was battling Ewing Sarcoma. Kailem died last week.

There’s an alternate way to view the video. Critics charged that Tonkins’ punch was not necessary to rescue his dog—especially given that it occurred after the kangaroo had let go of Max—and should be considered animal cruelty. After Daily Mail Australia discovered that Tonkins worked as an elephant keeper at the Taronga Zoo, people “inundated” the zoo with complaints and concern.

Last night, the zoo issued a statement on Facebook.

The zoo elaborated in a post on its site:

Best practice animal welfare and the protection of Australian wildlife are of the utmost importance to Taronga. Taronga strongly opposes the striking of animals and does not support the practice of using dogs to hunt, as this can result in negative welfare for both species. We support the Guidelines outlined by the Department of Environment and Heritage in the event of confrontation with a kangaroo.

However, the highest standards of animal welfare and care are a core value of Taronga and one that we expect our staff to uphold in all their interactions with wildlife and we continue to work with Mr Tonkins on his conduct in regards to this incident.

That should settle the matter, but post-Harambe, who knows where this saga might lead to next.