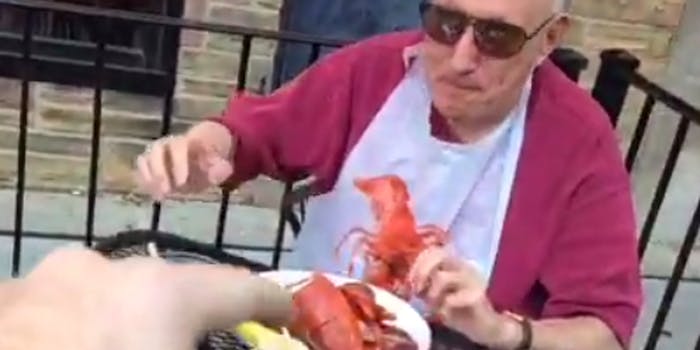 A new gold standard is set for the video snippet service.

New York comedian Conner O’Malley is all over the Web—he’s one half of sketch duo Coozehound and boasts a reliably hilarious Twitter account—but where he really shines is on Vine, where he guerilla-films bizarre encounters with strangers. You’ll have to see it to believe it, and afterward you’ll have to agree: O’Malley’s made the medium his own.

These incidents tend to involve O’Malley playing some type of deranged character obsessed with nice cars, the power of god, the “pimp” lifestyle and the appearance of wealth in general. Often he’s simply harassing guys in convertibles in a voice somewhere between mentally ill homeless preacher and Brak from Space Ghost.

Naturally, a lot of people aren’t sure what to make of him, and would rather just tune his ranting out once they get a sense of how unhinged he is. (Each Vine appears with borderline unintelligible leet-speak hashtags to boot.)

Others, along with their evident confusion, start to show signs of alarm—probably with good cause.

Once in a while (and it’s shocking it doesn’t happen more often), somebody gets a bit more upset. I suppose if you had a ride this pimpin’, you’d be overprotective, too.

Best of all, though, isn’t any one person getting upset at O’Malley’s gargled outbursts, but the unexpected friends he makes along the way.

It’s easy to imagine how irritated you’d be if selected as the subject for one of these Vines, though it’s hard to resist laughing at their unscripted discomfiture and fine-tuned sense of chaos. May as well enjoy them now, before they get O’Malley arrested somehow.