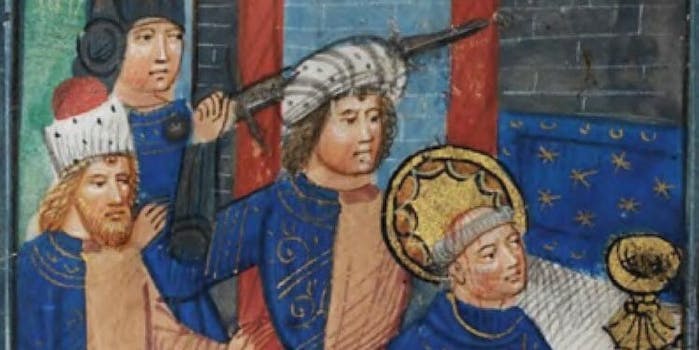 Why was Thomas Becket invoked?

Of all things people expected to see from fired FBI Director James Comey’s testimony before the Senate Intelligence Committee, turning an 800-year-old Henry II quote into an internet meme was perhaps not one of them. But that’s exactly what happened when Sen. Angus King (I-Maine) questioned Comey about one of his conversations with Donald Trump.

“When the President of the United States says something like ‘I hope’ or ‘I suggest’ or ‘Would you?’ do you take that as a directive?” King asked.

“Yes,” Comey responded. “It rings in my ear as kind of ‘Will no one rid me of this meddlesome priest?'”

That’s a reference to Henry II’s infamous beef with Thomas A Becket, the Archbishop of Canterbury. Henry appointed Becket in the 1160s, expecting he would be loyal to the throne, but Becket instead began asserting the rights of the church, bringing him into bitter conflict with the king. In 1170, Henry was supposed to have complained, “Will no one rid me of the turbulent priest?”

A group of knights, interpreting that as an order, killed Becket.

Senator King wasn’t just familiar with the reference—he had prepared for it to come up at the hearing. Here’s what he said after Comey’s ‘meddlesome priest’ remark:

“I was just going to quote that. In 1170, December 29, Henry II said ”won’t someone rid me of this meddlesome priest’ and then the next day he was killed, Thomas A Becket. That’s exactly the same situation. We’re thinking along the same lines.”

The exchange was thrilling for the internet’s history nerds—finally, their degrees were good for something!—and immediately became a hot topic on Twitter:

Trump will remember the Henry II "meddlesome priest" bit from his days studying medieval history at Cambridge, of course.

"Will no one rid me of this turbulent priest?" yas murder of Thomas Beckett reference yas #ComeyDay #HistoryNerd

A bit annoyed that I have to delete "Will no one rid me of this turbulent priest?" from the script draft I wrote 6 months ago.

The Becket reference is so applicable to the conversation Comey described, where Trump allegedly said “I hope” the FBI will drop the investigation against Gen. Michael Flynn, that at least one person called it before it happened:

Crazy that something involving Donald Trump would get the whole internet jazzed about medieval history, but here we are.