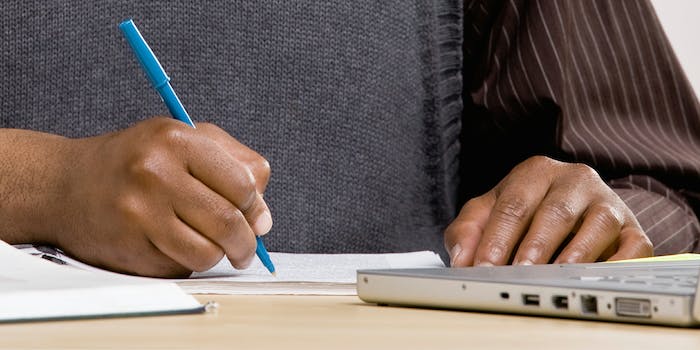 Did a student find out he was failing a class on Twitter?

Nowadays, almost anything you do in public can be blasted all over the internet. Even the most mundane of tasks could become the internet’s next obsession. A teacher at Howard University probably assumed that grading some papers on a flight was not going to wind up all over social media. But a half million likes and retweets later, Twitter is obsessed with the identity of one failing student.

It started when “roy,” a graphic designer, tweeted out that he saw a Howard University professor grading papers on a flight. One person’s test stuck out to him.

This professor graded tests next to me the whole flight. If there’s a Taiwan Jones at Howard, boy you failed the fuck out ya midterm 😩

Rough life. Immediately, Twitter started a hashtag to try and find the student.

He said a friend saw the viral tweet and sent it to him.

How’d you end up finding out about the tweet. Did a friend see it and tell you or did you come across it in your TL. Sorry about your midterm but this is funny stuff.

Ya my boi Moe sent me this and my heart straight dropped pic.twitter.com/RUNmy69Dul

Jones even responded to people who were hunting for him.

Well the search is over…

Some were worried his parents might not appreciate their son bombing out of college.

Trust me they aint gonna find out

One person even took it upon himself to fix Jones’ Twitter bio.

The only problem with all this? There’s more than one Taiwan Jones on Twitter. Both have Howard University in their bios, but that’s easy enough to add before tweeting.

Even weirder, Howard doesn’t show any records for a Taiwan Jones in its directory. It’s possible that the student is enrolled with another name but goes by Taiwan.