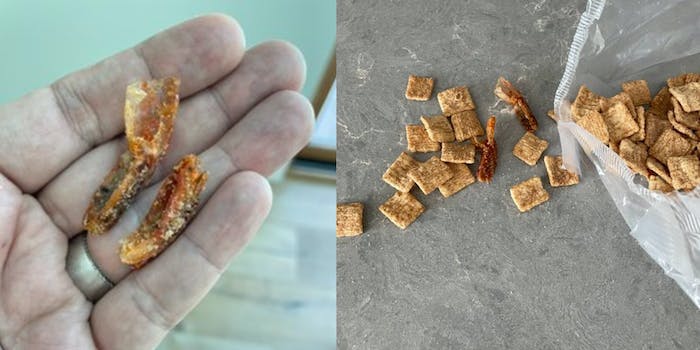 The customer revealed that he's getting the mystery items DNA-tested.

A customer, along with many online spectators, is accusing Cinnamon Toast Crunch of gaslighting him after he found “shrimp tails” in his box of cereal.

On Monday, Jensen Karp, a comedian and writer who’s worked on shows like Unleashed and The Masked Singer, claimed on Twitter that he found shrimp tails in his cereal, including photographic evidence and even feeling the need to clarify that “this is not a bit.”

“Why are there shrimp tails in my cereal?” he questioned the company.

In response, Cinnamon Toast Crunch asked Karp, from its official Twitter account, to DM it so that it could collect more details and report what he found to its quality team. It also offered to send him another box, to which he understandably replied, “GUYS – I am not sure I’m ready for another box!!!”

“After further investigation with our team that closely examined the image, it appears to be an accumulation of the cinnamon sugar that sometimes can occur when ingredients aren’t thoroughly blended. We assure you that there’s no possibility of cross contamination with shrimp,” the company later wrote back.

“Ok, we’ll after further investigation with my eyes, these are cinnamon coated SHRIMP TAILS, you weirdos. I wasn’t all that mad until you now tried to gaslight me?” Karp responded, including two more photos of his hand holding up the apparent shrimp tails.

And it appears several others agree, with writer Dana Schwartz calling the company’s alleged gaslighting a “national scandal.”

“General Mills trying to gaslight a person about them finding shrimp tails in their box of Cinnamon Toast Crunch was not on my March 2021 Bingo card,” another said.

A third referred to it as “the cinnamon toast crunch shrimp tails gaslight incident of 2021.”

Apart from all the accusations of gaslighting, there is also a flurry of memes and jokes regarding the scandal. And, of course, there are also some Cinnamon Toast Crunch stans who feel let down.

While the “shrimp tails” are what’s garnering the most attention online, they aren’t the only fishy items Karp found in the box of cereal. He later revealed that he found a “weird little string,” a “weird cinnamon covered pea thing,” and squares that have black marks and are dyed red, among other things, in the box.

He also revealed that he “ate a bowl before noticing all this.”

Karp is now getting to the bottom of what the mystery items are. “I am now in touch with a testing lab re: the ‘black things,’ which I will not yet be calling by any other name for my own sanity. Also, a research company will be paying to DNA test the shrimp tail! (2021, y’all),” he revealed in his latest update on the matter.

General Mills, which produces the cereal, told the Daily Dot in a statement that it is “still investigating this matter.”

“We can say with confidence that this did not occur at our facility,” Mike Siemienas, a spokesperson for General Mills, said. “We are waiting for the consumer to send us the package to investigate further. Any consumers who notice their cereal box or bag has been tampered with, such as the clear tape that was found in this case, should contact us.”