The CIA just declassified an investigation on 9/11. Why's the whole section on the Saudi connection left blank?

In June of 2005, the U.S. government released a 465-page investigation into the 9/11 attacks, with the main question being, “How the hell did we not see this coming?” That document was recently declassified, and there’s one omission that has lot of people asking questions:

Why is the entire section on Saudi Arabia’s connection to the attacks omitted from the document?

It’s no secret that 15 of the 19 hijackers on 9/11 were Saudi nationals, and speculation has long existed as to whether the oil-rich country had a hand in aiding al-Qaeda’s actions on that fateful day. Conspiracy theorists have long speculated that the U.S. is hiding a Saudi connection to 9/11 due to their high reliance on their petroleum.

However, there’s a problem with that theory: According to an NPR article—getting their information from the U.S. Energy Information Administration—the U.S. gets about 13 percent of their oil from the Persian Gulf, with about eight percent of that oil coming from Saudi Arabia. Looking at a graph from the EIA, and barring the infamous oil recession of the mid ‘80s, that rate has stayed fairly consistent both before and after the 9/11 attacks.

So if the U.S. isn’t censoring info on the Saudis to protect their own interest in their oil, why did they omit 28 pages about the country’s connection to 9/11? Why are there only two pages in that section that don’t look like this? 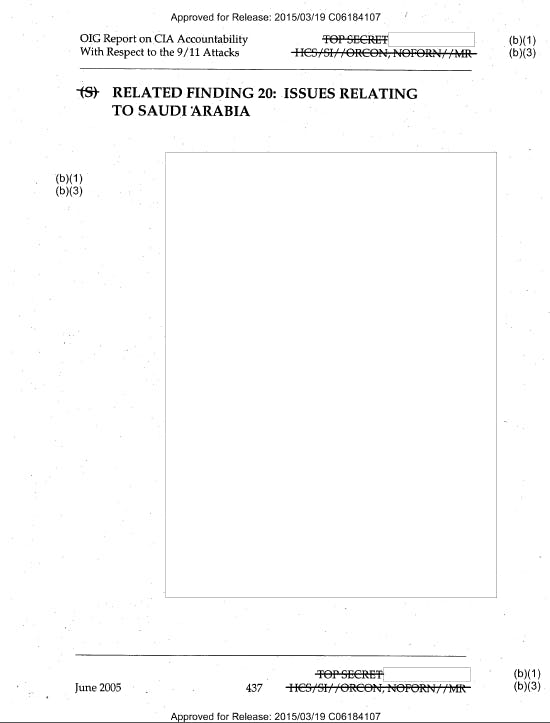 Why do things, like Figure R20-1, have nothing on them? 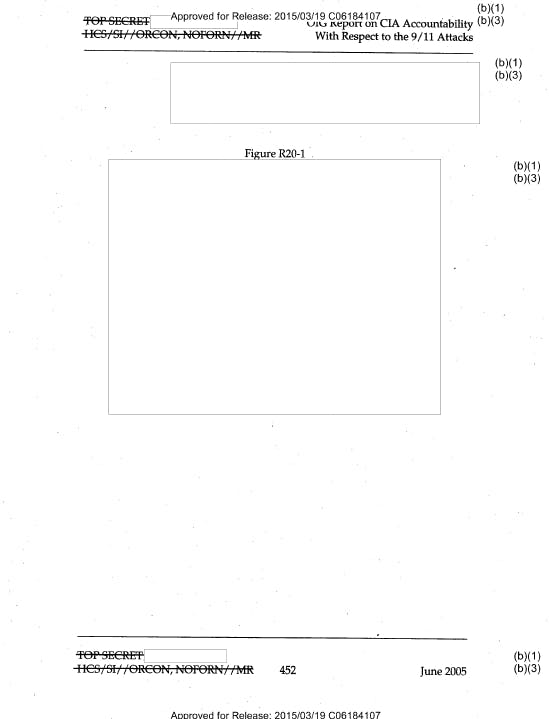 Figures 2-4 look just like figure 1: blank. In fact, the only text found within the section labeled under “Issues Regarding to Saudi Arabia” come on the third and fourth pages of the section (which happens to be the final section of the report): 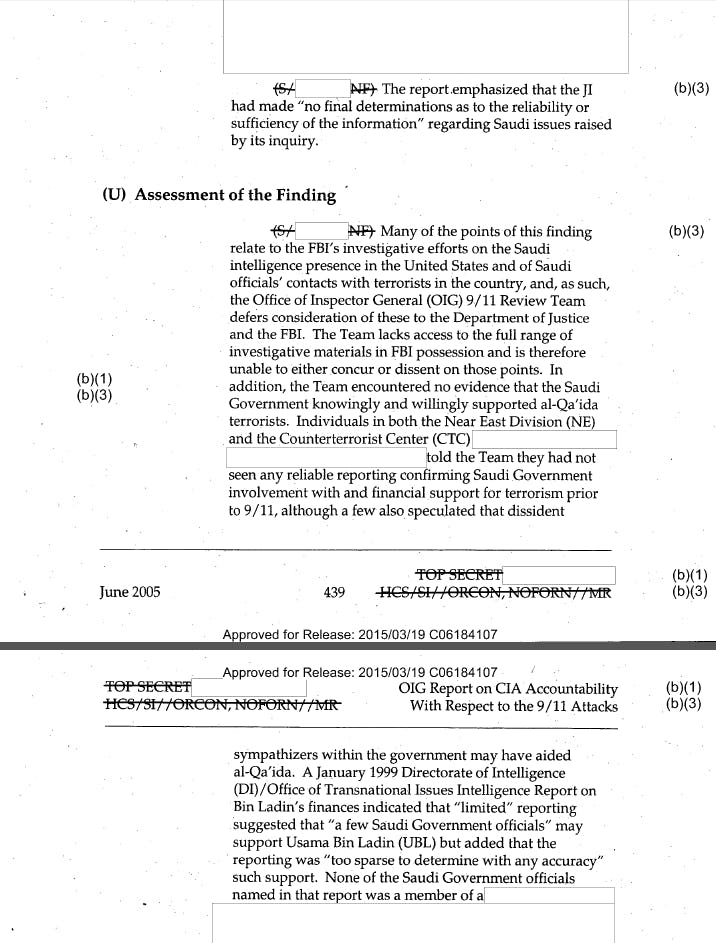 So why the secrecy? Is it because the Saudi government had a heavier hand in the 9/11 attacks than the U.S. government wants people to know, but they can’t afford to make that information public?

It’s because of diplomacy. The Saudi government is an ally to the United States, and while it’s fine and dandy that the U.S. has declassified a detailed report on how massively they screwed up on the intelligence end of all things involving 9/11—and how that screwup led to the Twin Towers falling, a piece of the the Pentagon exploding, and a plane being overrun and crashing into a field in Stonycreek, Pennsylvania while en route to the White House—it’s still bad international etiquette to air information on other countries when you declassify a report on your own.

For example: Let’s look at a few pages from a section of the report entitled “The Highjackers’ Associates in Germany.” The section comprises pages 89-99 of the report, and all but two of them (the first and last ones, which have two small paragraphs consisting of very vague information) look like this: 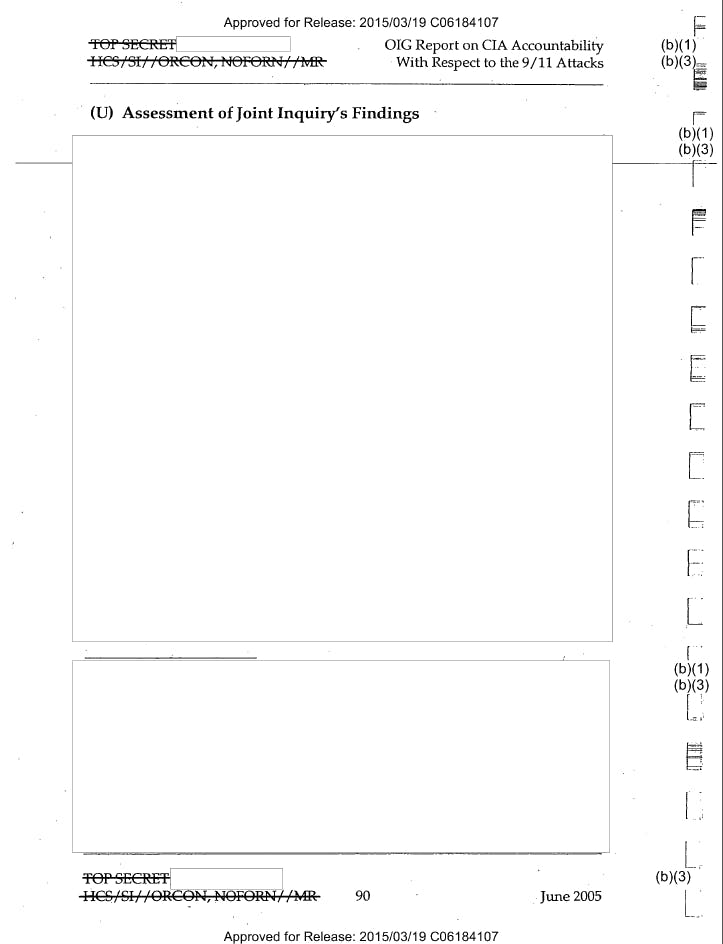 Is it possible that Germany also played a large role in coordinating the 9/11 attacks—and that the Central Intelligence Agency is covering that up in this report, too? Well, sure—I suppose that anything’s possible.

But it’s a lot more likely that the highjackers had contacts in Germany—just like the highjackers had contacts in Saudi Arabia—and the U.S. is simply protecting both countries’ intel by omitting their information on those contacts in the public release of this report. With 15 of the 19 highjackers being Saudi nationals, it’s far more likely that the omitted info is detailing stuff such as: where they were staying, how they stayed in contact with al-Qaeda, how they mobilized under the radar into the United States… and so on.

Basically: Those omitted pages are about the highjackers and their connections to al-Qaeda—and perhaps detailing a lack of solid intelligence and cooperation with Saudi Arabia—but they’re very unlikely detailing ways in which that country’s government itself was directly involved with the attacks. To assume so, based on the fact that pages have been omitted in this report, you’d have to assume the same about Germany, and the last time I checked, the U.S. and Germany have been on fairly decent terms for quite a while now.

To take your own look at the report, you can download it in its entirety right here.

Joey Keeton is a contributing writer for the Daily Dot.