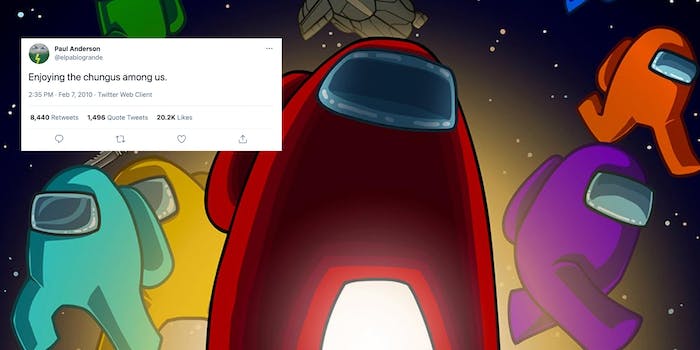 Did a Twitter user really reference 2 modern memes back in 2010? User’s ‘Chungus Among Us’ tweet sparks time travel debate

A decade-old tweet by Paul Anderson, known as @elpablogrande, that references two modern memes is making some internet users believe in time travel.

The tweet, which simply reads “enjoying the chungus among us,” was sent on Feb. 7, 2010, but remains eerily relevant today. It seemingly refers to two modern internet sensations—”chungus” and the popular video game Among Us. The former is a slang word coined by video game journalist Jim Sterling who frequently used it in the early 2010s while hosting the Podtoid podcast. It is said to stand for “chunky anus” but is a bit of a catchall term that can mean anything. The exact date of origin is unknown, but Sterling is credited for the word as early as 2012. “Chungus” became widely known with the popularity of “Big Chungus,” referring to the 2017 Reddit meme depicting a fat Bugs Bunny on a mock video game cover. Among Us is a mafia-style computer game launched in 2018. It gained viral attention in late 2020 as a popular quarantine activity.

Some Twitter users found the post and declared it a work of time travel or psychic ability. The tweet has over 20,000 likes and a thousand quote tweets that are in awe of Anderson’s mind.

Several people were shocked that Anderson’s tweet was real.

Unfortunately, the explanation for the tweet likely isn’t as fun as a time machine nor supernatural powers. While Sterling is credited for using the term around 2012, the earliest Urban Dictionary entry for “chungus” dates back to 2005, defining the word as a synonym for cool. “Chungus” appears to be much older than most people think it is, and “among us” is a common phrase outside of the context of the video game. This context makes Anderson’s old tweet a little more sensical.

A Twitter search for “chungus among us” also reveals more old tweets using the popular phrases from around the same time as Anderson’s, indicating that it’s not so wild of an old tweet after all.

As for Anderson, it appears he may be unaware of the hubbub around his tweet. He isn’t very active on Twitter these days, and his last tweet was sent in 2013.