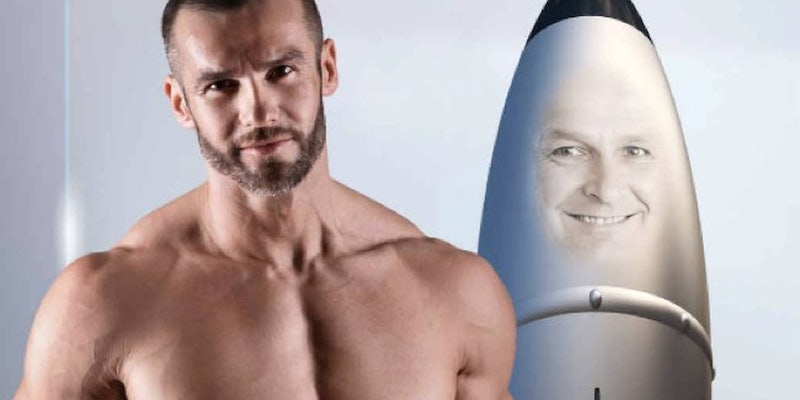 Chuck Tingle is the Internet’s most beloved author of bizarre niche erotica, perhaps best known for his masterwork Pounded in the Butt by My Own Butt. The Hugo Awards are a formerly prestigious sci-fi honor, hijacked in recent years by racist neoreactionaries and Gamergaters aiming to Make Science Fiction Not Diverse Again. This is a little story about what happened when the two of them collided this month, and Tingle gave these conservative forces a divine metaphorical butt-pounding.

To understand how truly beautiful, how truly masterful Tingle’s trolling is, you’re going to need a little background information.

In 2014 and 2015, two groups calling themselves the Sad Puppies and the Rabid Puppies decided to fight back against what they saw as the forced inclusion of women and minorities in stories that they believed should be exclusively about cool spaceships. Their strategy was to create a “slate” of recommended candidates for the Hugo Awards and rally their supporters to vote for the works as a bloc.

It kinda-sorta worked, and they did it again this year, with even greater success. “Hugo awards shortlist dominated by rightwing campaign,” proclaimed the Guardian.

The figurehead of the Rabid Puppies campaign, the more extreme of the two, is one “Vox Day.” Last year, a Gawker blogger (full disclosure: it was me) described him as “a neoreactionary blogger for racist wackadoodle news site WorldNetDaily who, among other things, believes blacks are inferior to whites and marital rape is ‘an oxymoron.'”

In other words, a real nice guy.

That catches us up to the present, where Chuck Tingle is a finalist for a Hugo for his book Space Raptor Butt Invasion, thanks to support from both the Sad and the Rabid Puppies. Tingle has responded in three major ways, all of them brilliant and genuinely, laugh-out-loud, maybe-piss-yourself-just-a -little-bit funny.

One: he’s written a story called Slammed in the Butt by My Hugo Award Nomination.

Slammed in the Butt is a twisted, fourth-wall-breaking work of metafiction, explaining the many layers of the erotically-charged “Tingleverse” in which Tingle’s characters live, love, and have sex with airplanes. It’s worth the three bucks, probably. And it shows just how seriously Tingle takes this award nomination.

Two, Tingle directly addressed the conservative forces who may now regret nominating him by trolling the shit out of Vox Day on Twitter. Day has been gloating about Tingle’s nomination because it was meant to delegitimize the Hugos in the eyes of outsiders (never mind that Day still desperately wants to win one.) However, Tingle has made it clear—in his own inimitable way—that he doesn’t exactly respect Day.

He’s been referring to Day as “VOXMAN” and his supporters as “devilmen.” It’s weird and wonderful.

son said to LEARN about hugos situation so i found inspiring quote from VOXMAN (kenna reves proud dad of the matrix) pic.twitter.com/j9hAzBMS67

is this true? please tell me if voxman is pro devilman agenda before i agree to write THE MATRIX 3: BIG DAY OUT https://t.co/adPuZ6GfyX

voxman is very upset but this is the right thing to do. sorry to announce cancelation of matrix 3: big day out pic.twitter.com/bbhqNbSi7W

BING SEARCH voxman in the matrix imagining weiners for hands and putting them in his own butt, shaking and drooling (cutely) HD VIDEO

we all know this classic moment of dealing with VOXMAN (kenna reves proud dad and writer of matrix 1 and 2) pic.twitter.com/YVc5qTq3dF

As hilarious and thorough as these VOXMAN owns are, mere Twitter owns aren’t enough to defeat a campaign whose main goal seems to be attention for Day. He’s expressed, in so many words, that hate can only make him stronger.

That’s where the third prong of Tingle’s trolling makes a difference. As the Daily Dot’s April Siese discussed in her recent profile of Tingle, the hard and sexy author’s true identity remains a mystery. He cannot very well reveal himself by showing up to an award ceremony. So, in his place, he has invited perhaps the one person internet alt-rightists and Gamergate-adjacent agitators hate most.

IMPORTANT: cant go to hugos award so to thwart devil plans, true buckaroo ZOE QUINN (name of @unburtwitch) has agreed to accept award for me

Zoe Quinn, game developer and anti-harassment activist, was the original target of Gamergate after an ex-boyfriend revealed alleged details of her sex life online. She’s the boogeyman (boogeywoman?) Gamergate frothingly rose up to “defeat,” their imaginary platonic ideal of a “Social Justice Warrior.”

I am so proud of you doctor, my best friend #hardbuds https://t.co/vQB31sRUnD

It’s just too perfect. Tingle has confronted the forces that tried to use his work for their own ends and judo-flipped their tactics back on them. And the entire time, he’s maintained his aloof, free-loving persona. If there were a Hugo Award for Internet trolling, he would certainly deserve it.

How will this drama end? Doesn’t matter much, really. The Hugos have gone through a few turbulent years, but a proposed rules change is likely to negate the impact of slate voting starting next year. The Puppies will have to find a new pet tactic, or the awards will go on as if the reactionaries never existed.