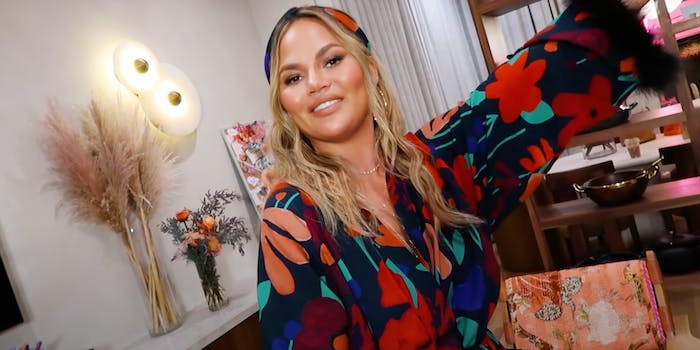 Chrissy Teigen issued yet another public apology in which she talks about her “VERY humbling few weeks.”

“I know I’ve been quiet, and lord knows you don’t want to hear about me, but I want you to know I’ve been sitting in a hole of deserved global punishment, the ultimate ‘sit here and think about what you’ve done,’” Teigen wrote.

Twitter users agreed. They didn’t want to hear from her.

Teigen’s apology, a five-minute read published on Medium, came weeks after Teigen’s public Twitter apology to model and media personality Courtney Stodden for trolling them on social media when they were a teenager.

In a recent interview with the Daily Beast, Stodden called out several celebrities, including Teigen, for bullying them in 2011 when they married then 50-year-old actor Doug Hutchison at age 16.

“[Teigen] wouldn’t just publicly tweet about wanting me to take ‘a dirt nap’ but would privately DM me and tell me to kill myself. Things like, “I can’t wait for you to die,” Stodden told the Daily Beast.

Teigen acknowledged that a bunch of her “old awful (awful, awful) tweets resurfaced” and said she’s “truly ashamed of them.”

She said she apologized publicly to one person—Courtney Stodden—but there are more than a few others she still needs to say sorry to, and she’s in the process of privately reaching out to those people.

Folks on Twitter believe this is simply Teigen’s “monthly apology” to avoid losing sponsors and that she doesn’t actually care about hurting people’s feelings.

One user tweeted, “Chrissy Teigen is the monster she spent 4+ years claiming Trump was. She was an adult when she was telling a minor to kill [themself]. A person has to be a sociopath to do that sh*t. The only reason Teigen is faking remorse and giving out fake apologies is that it got found out.”

Teigen wrote that she was never mean in her everyday life, but when she began using social media when it debuted, she had so much fun with it by making jokes and random observations and snarking at celebrities.

“In reality, I was insecure, immature and in a world where I thought I needed to impress strangers to be accepted,” she continued in the Medium post. “If there was a pop culture pile-on, I took to Twitter to try to gain attention and show off what I at the time believed was a crude, clever, harmless quip. I thought it made me cool and relatable if I poked fun at celebrities.”

Teigen clarified that she wrote the Medium apology for context, not to seek sympathy, saying there’s no justification for her behavior. She said she’s a different person now—she got married, had children and received therapy.

“Life has made me more empathetic,” she said. “I’m more understanding of what motivates trolling — the instant gratification that you get from lashing out and clapping back, throwing rocks at someone you think is invincible because they’re famous. Also, I know now how it feels to be on the receiving end of incredible vitriol. Believe me, the irony of this is not lost on me.”