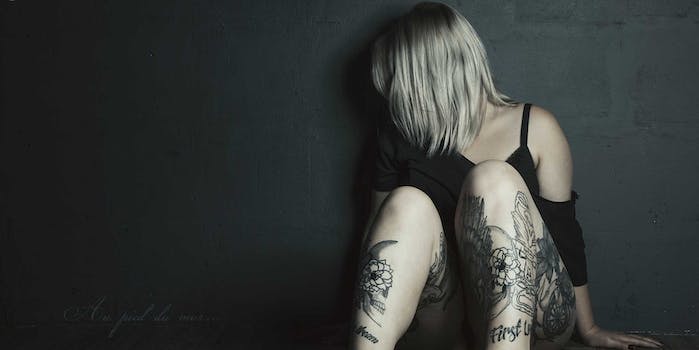 Rape culture is so terrible that even survivors believe the hype.

In an anti-rape PSA video for the “It’s On Us” campaign just released on YouTube, celebrities such as Zoe Saldana and members of the sister-band HAIM told viewers that non-consensual sex is not sex—it’s rape. As the video spread awareness about the perils of rape culture, another message emerged to derail the conversation. But it didn’t come from the typical online rape apologists who endlessly troll Twitter and Reddit. It came from a rape survivor.

Chrissie Hynde, the frontwoman for The Pretenders, recently gave a raw and candid interview to the Sunday Times, which left fans and critics alike in shock. In the first part of her unexpected confession, she revealed that she had been sexually assaulted at the age of 21 by a member of an Ohio motorcycle gang. She was lead to believe that she would be attending a party, only to arrive to an empty house—and then the unthinkable happened.

However, it wasn’t the unfortunate horror of rape that incited public backlash. Rather, it was Hynde’s firm, unapologetic disavowal of her own innocence and right to consent. She dismissed the idea that she was a victim and fiercely said, “Technically speaking, however you want to look at it, this was all my doing and I take full responsibility. You can’t f*** about with people, especially people who wear ‘I Heart Rape’ and ‘On Your Knees’ badges…those motorcycle gangs, that’s what they do.”

Hynde’s comments uncannily mirror the sentiments of those, such as Sun columnist Jane Moore, who penned a response column to Hynde’s Times interview. Echoing the base arguments of the singer, Moore wrote, “It happens and it always will. No one should ever blame the victims, but equally we’d be idiots not to try to minimize the chances of us or worse, our kids becoming the victim of one of these crimes.”

Moore, who is currently on the panel of a British talk show called Loose Women, put forth an audience poll that asked, “Is It ever a woman’s fault if she’s raped?”

For the rape apologists emboldened by Chrissie Hynde's daft comments, here's a handy pie chart for you. pic.twitter.com/g6QgzHT3Qe

The notion that any mans sexual desire renders him incapable of understanding the word 'no' is a pathetic & dangerous deceit. #ChrissieHynde

The foundation of rape culture heavily depends on victim blaming. Antagonists believe that the victim of the crime is the one with sole responsibility, that his or her vulnerability and state (or lack thereof) of consent is an irrelevant factor. It is essentially the misogynistic argument that the person was “asking for it.”

In other words, it’s not the victims that should receive sympathy or empathy, but the rapists themselves, because “they can’t help it.”

Author Kate Harding, a victim of rape, addresses the poisonous infrastructure of rape culture in her book, Asking For It: The Alarming Rise of Rape Culture — and What We Can Do About It. Harding is not afraid to directly call out the trend of public condemnation of rape victims and writes, “It is as though none of us ever learned about ‘passive voice’ in freshman comp. She was raped. Local woman raped. Girl, 11, raped in abandoned trailer. Who’s doing all the raping here? Incubi? If nobody’s actually committing rape, how are we supposed to address it as a public health and safety issue.”

Hynde didn’t stop at the details of her past. She added, “You can’t paint yourself into a corner and then say whose brush is this? You have to take responsibility. I mean, I was naive. If you play with fire you get burnt. It’s not any secret, is it?” It’s quite alarming, even downright disturbing, that Hynde would admit that she was naive, yet label her naivety as a personal downfall or weakness that deserved such heinous violation of the body. She seems to argue that taking responsibility means that victims make themselves easy prey, and that rapists are as natural a part of civilized society as having a full-time job or the changing of the tides. In other words, it’s not the victims that should receive sympathy or empathy, but the rapists themselves, because “they can’t help it.”

Later on, Hynde expounds on consent when a woman is intoxicated. She believes that when a woman is drunk, it’s a clear invitation to rape: “If I’m walking around in my underwear and I’m drunk? Who else’s fault can it be?” According to the White House and the It’s On Us campaign, the fault is solely on the rapist. In a speech that officially unveiled the campaign last fall, President Obama cited a White House report that found that 1 in 5 college women will be raped during the course of her college career.

The advocacy efforts go beyond some government officials, too. Earlier this year, Jackie Fuchs (aka Jackie Fox), one-time bassist from the Runaways—the 70s, all-girl rock and roll group that included Joan Jett and Cherie Currie—spoke in great detail to the Huffington Post about her short years as a member of the influential band. Fuchs revealed that their crass, eccentric manager, Kim Fowley, had sexually assaulted her while she was inebriated at a New Year’s Eve party. Fuchs was only fifteen.

“It bothers me, because I don’t know that she’s gone out there and talked to [other] rape victims. If you had seen the messages that people sent me, so many of them were about ‘I’ve always thought it was my fault.’ We already think that anyway. So this is just telling people who’ve recently gone through this experience of being raped or abused, ‘Yeah, you’re right, it is your fault.’ But there’s no such thing as asking for it. And poor judgment is not an invitation to rape, nor an excuse for it.”

In many high-profile cases of sexual assault and rape, especially incidents that occur on college campuses across the nation, victims and alleged abusers are caught in a legal battle of this same caliber, wherein the conversation boils down to: “What did she do to provoke or entice the rapist?” Such mentality even trickles down to high school and middle school, where dress codes for girls are hot-button issues, essentially arguing that the girls are “tempting” or “distracting” their male peers by showing any skin.

Chrissie Hynde, taking us back to the 1970s – not with music – but by saying women bring rape on themselves by how they dress

Sometimes the violation isn’t even due to a piece of clothing like a crop top or a too-short skirt. As one student learned in Kentucky, even showing her collarbones is in strict violation of the dress code. In a Facebook photo posted by the student’s mother, Stephanie Hughes is pictured wearing blue jeans, an open-faced cardigan, and a simple tank top that is neither low-cut or clingy. It’s an ordinary outfit that shouldn’t cause such a stir.

Why is our culture so hellbent on casting girls and young women as the root of the problem, and not the collateral?

Why is our culture so hellbent on casting girls and young women as the root of the problem, and not the collateral? The choking prevalence of rape culture is so strong that even victims, such as Hynde, are convinced that they brought such acts upon themselves, thus perpetuating the shame and stigma that is attached to reporting sexual assault and rape. As Lucy Hastings, head of the charity Victim Support said in response to Hynde, “Victims of sexual violence should never feel or be made to feel that they were responsible for the appalling crime they suffered…It is critical that nothing deters victims of sexual violence from coming forward to the police or to independent organizations so they can get the help and support they need.”

The system of victim blaming can only be dismantled if we stop demanding that the victims earn penance for their lack of consent.

Vanessa Willoughby is a freelance writer and editor, and a graduate of The New School’s MFA program.