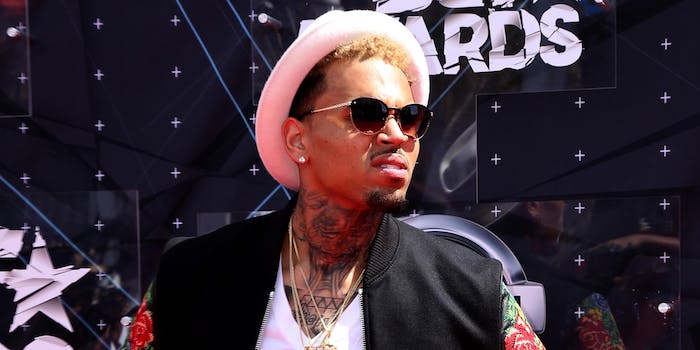 Chris Brown gets dragged for new song ‘She Bumped Her Head’

The rapper was arrested in 2009 for attacking Rihanna.

Chris Brown baffled and outraged listeners last night when he released a new song titled “She Bumped Her Head.”

The song appears on Brown’s new collaborative mixtape with Young Thug, Slime & B, which the R&B star dropped last night to commemorate his 31st birthday. The tape features a host of other rappers including Gunna, E-40, and Future.

Brown fans were excited about the arrival of Slime & B, but many people immediately took issue with the title and lyrical content of “She Bumped Her Head.” In the chorus, Brown and Thug sing, “My lil’ shawty had bumped her head, and I steady been whippin’ her/If I roll up the Maybach windows, we don’t care ’bout the listeners.”

While Thug’s “sex” ad-libs between bars make it clear that the song is about sex, the lyrics could be interpreted as endorsing violence again women. That’s not a good look for Brown, who in 2009 was arrested for attacking his then-girlfriend Rihanna and pleaded guilty to felony assault.

Brown’s song title raised eyebrows as well. The phrase “bumped your head” is slang for somebody who thought wrong or has no idea what they’re talking about. But it could also be read as an excuse somebody uses to cover up domestic abuse. Some fans gave the same explanation on Twitter and praised Brown for the track.

But most users weren’t having it. Many dragged Brown for the title and lyrics of “She Bumped Her Head” and argued that, double entendre or not, the singer should have known better. YouTuber and music critic Anthony Fantano put it succinctly: “Why the f*ck would he title a song this?”

It looks like Brown will ring in 31 in a way that’s familiar to him: by racking up streams and courting controversy.