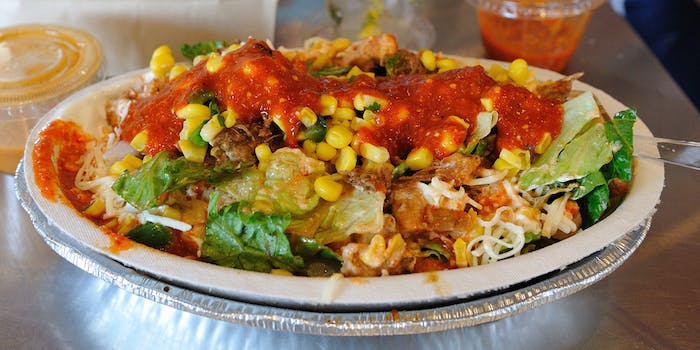 Out of all the items you must never use out as Twitter fodder—your address, your phone number, your plane ticket reservations, your positive gonorrhea test results—there’s probably one you hadn’t thought about before: your coupon for one free Chipotle burrito.

If you do tweet your coupon, this dude claiming to be a 16-year-old high school junior named Eli who tweets under the handle @ayoo_eliii might virtually filch it from you—and eat your lunch in real life.

With Chipotle closed for lunchtime on Monday for a company-wide safety meeting following the discovery of E. coli in a sprinkling of stores, the Mexican fast-food chain offered everybody a free burrito if you texted the word “raincheck” to the number 888-222.

But since that coupon had a barcode on it that could be stolen, Eli—or Eli’s stomach—was soon in business. (Luckily, the people who accidentally added an extra “2” to the giveaway number didn’t need worry about their burritos being taken away.)

"Can I see your phone real quick"
"Yeah hold up" pic.twitter.com/A5h9FXJt0V

Enzo, the first victim to be swindled out of his guacamole, told New York Mag that his burrito had been taken by technology. Asked for his current status, Enzo said, “I’m feeling hungry.” He added: “I’m not mad, hopefully he will use the money he saved by stealing my burrito to buy a nicer hat.”

Strong Twitter avatar burn aside, it’s doubtful that Eli and his full belly cared much about Enzo’s plight.

“I do not have any remorse for nabbing these burritos, due to the fact that it is their fault for tweeting their coupon out,” Eli told the site. “… How could you [be] that oblivious to the fact that you just tweeted a free Chipotle coupon out?”

True, it’s not like Eli is a masticating mastermind. He’s more like an omophagy opportunist. And as one of his admirers mentioned on Twitter, Eli isn’t a thief.

No, Eli is Chipotle’s Hamburglar.