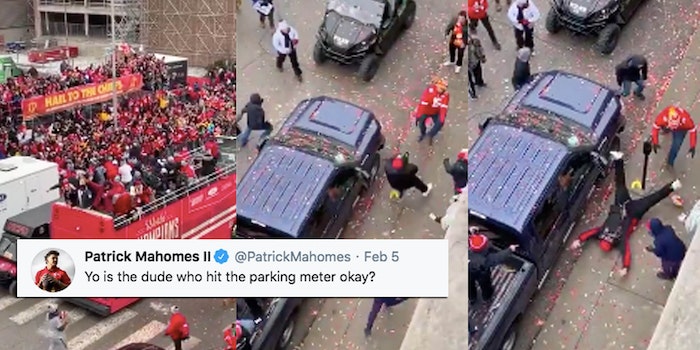 Mahomes even responded to the viral video.

If  you’ve ever had the opportunity to meet a celebrity, you’re probably familiar with the creeping anxiety that you’ll somehow embarrass yourself. You start to worry that you’ll stutter over your words, forget all the praise you want to lavish on them, or even just say something completely ridiculous that makes you sound like a total weirdo.

But one Chiefs fan recently took embarrassment in front of your heroes to a whole new level.

Larue Bell attended a victory parade for the Kansas City Chiefs after their Super Bowl win last week. When he saw that quarterback and MVP Patrick Mahomes was tossing footballs to the fans who came out to cheer for the team, he jumped at the chance to catch one that was headed in his direction.

Unfortunately, a parking meter standing directly in his way felt differently about the matter.

@PatrickMahomes throwing the greatest post route of his career at the parade today #ChiefsChampionshipParade pic.twitter.com/Cj6i44PgWY

Bell ran directly into the meter, falling right on his back.

But Bell is OK, so we don’t have to feel guilty about watching the instant replay.

“I hit it pretty hard,” Bell told the Star once he found out video of the incident had gone viral. “I took a professional NFL hit for that ball. That was my Super Bowl.”

Bell said he stayed down for a moment, but he was ultimately able to shake it off, minus a little soreness and the iPhone that shattered in his pocket upon impact. But the real bummer for him was that another fan wound up with the ball—which Bell insists was intended for him.

“One of the players, he was pointing at me, he grabs Mahomes and points at me again like throw him the ball, let’s go!” he said.

But while he didn’t end up with a football to commemorate the Chiefs’ win, he did get his 15 minutes of viral fame and a whole lotta laughs.

No DPI, that was a bang bang play.

100% Meter was set, never moved.
Help D has to call out the back side screens!
Everytime! Every dang time!

Update from @Stephania_ESPN: “Although there was no flag on the play, the parking meter was later suspended for one game and fined $500,000 for the hit on a defenseless receiver. The receiver is out 4-6 weeks with a bruised ego. And also a hangover.” @MikeClayNFL @BadSportsRefs

“Yo is the dude who hit the parking meter okay?” Mahomes asked on Twitter.

Yo is the dude who hit the parking meter okay? https://t.co/Kzs9uNIwFG

If the football fan ever gets a chance to meet Mahomes again in the future, it will definitely make the perfect icebreaker—“Hey, remember that guy who dived right into a parking meter after you won the Super Bowl? It’s me!”