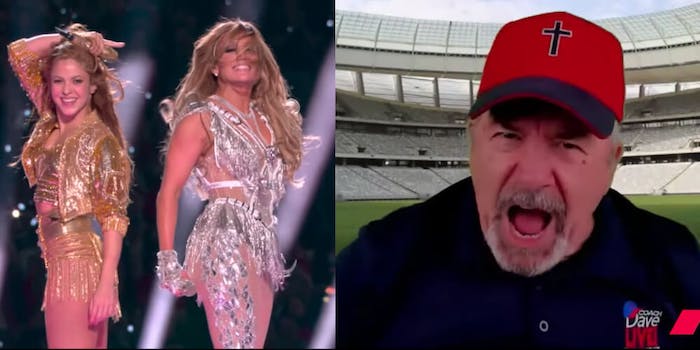 Dave Daubenmire said he wants to sue the NFL for $867 trillion.

In a recent live stream, Dave Daubenmire, a right-wing Christian activist, releases a rallying cry to viewers saying he wants to sue the NFL over the electrifying half time show, the A.V. Club reports.

Daubenmire, who also goes by “Coach Dave” online, criticized the show for not having any warnings that he says could’ve prevented young boys from becoming “sexually excited.” Throughout his video, he repeatedly calls Lopez and Shakira’s dancing as being laced with “crotch shots.”

In the video, Daubenmire said he wants to sue the NFL for $867 trillion. Responding to the Daily Dot’s request for comment, Daubenmire said the NFL should have had a televised warning before the show aired.

In a Facebook live post, Daubenmire said he didn’t watch the Super Bowl or the halftime show in its entirety.

He described the show as a “strip club performance.” A marching band would have been a better alternative option for NFL, he suggested. A quick look through the comments of the video show viewers agreeing with Daubenmire’s assessment.

Lopez and Shakira’s performance was lauded by a slew of fans and music critics alike, but some online discussions questioned if the performance was “objectifying” to women.

It’s ironic and sad that at a time when women are crying for equality and respect, the entire Super Bowl halftime show is women objectifying themselves and calling it family entertainment. #superbowlhalftime

The @SuperBowl halftime show was just a bad strip show. We have had so much positive discussion about not treating women like sexual objects, then they go & do this. You can’t cry that women need to be treated better then support this display of sexual objectifying #SuperbowlLIV

Despite the online rebukes—and threats of a potential lawsuit against the NFL—Lopez and Shakira have appeared unbothered on social media, posting continuous accolades and behind-the-scenes looks from Sunday’s mega-performance.

LOVE this moment with me and @shakira literally seconds after we went off air!! We were so happy!! #MissionAccomplished #SuperBowlHalftime #LatinoGang #GirlsGirls #StrongerTogether