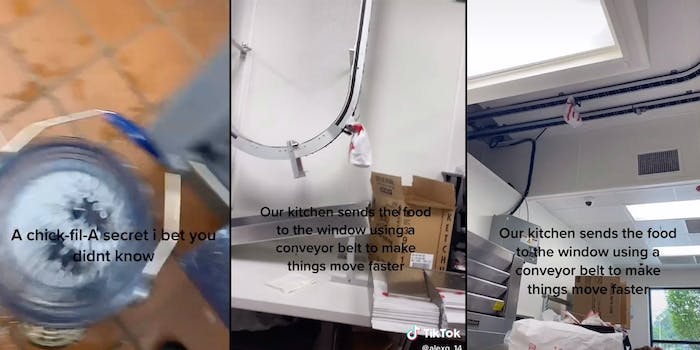 ‘This is just lazy.'

A TikToker going behind the scenes at Chick-fil-A posted a video to the platform featuring an “innovation.”

TikToker Alex Guerrero (@alexg_14) uploaded a video to the platform several weeks ago. He’s gathered nearly 20 million views and 2.2 million likes along the way with a short video that shows, as he put it, “a secret I bet you didn’t know” about the fast-food outlet.

The video starts with a point-of-view perspective of someone scooping ice into a bucket, and then shows a video of an elaborate conveyor belt system carrying a bag of food to the person at the Chick-fil-A counter.

The caption overlaid on the video reads, “Our kitchen sends the food to the window using a conveyor belt to make things move faster.”

Many viewers criticized how Guerrero had the ice bucket on the floor rather than remark on the conveyor belt. The few reactions to the belt itself weren’t any less critical, however, with one even calling the innovation “lazy.”

Guerrero has since turned off comments on the video.

This is not the first time the conveyor belt’s made an online appearance.

In April, the conveyor belt appeared on Reddit on both the r/ChickFilA and the r/WatchPeopleDieInside subreddits, showing a conveyor belt fail posted to Imgur.

In that video, a Chik-fil-A worker is poised to get a bag of food from the conveyor belt. However, she can’t reach the bag as it makes its way down the belt above her head, and the contents of the bag tumble out above her reach before it makes its way to the ramp on the counter in front of her.

The video on Imgur is captioned, “Who approved this design?” though it clearly didn’t work as intended in this instance.

One commenter mused, “Somewhere is a PowerPoint presentation about how this new conveyor system will improve productivity and profits.”

Another contributed to that sentiment, adding, “Presented by the board who sit in the corporate office doing nothing but ‘important’ meetings all day.”