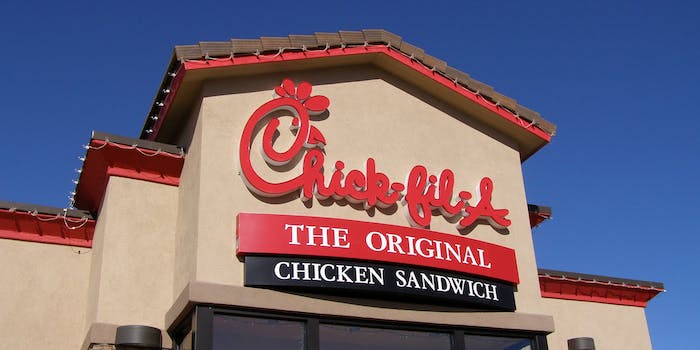 It's not fixing the real issue.

Chick-fil-A wants to bribe you for staying off your phone. The restaurant chain recently unrolled a promotion to compel customers to put away their devices while dining: By placing their smartphones in what Fox News reports is a “white box with wire-like designs that holds [customers’] electronics,” patrons will be given free ice cream. Chick-fil-A is calling it their “Cell Phone Coop Challenge,” and 150 locations are currently participating in the promotion.

The campaign was proposed by Brad Williams, a Chick-fil-A franchisee out of Suwanee, Georgia. “We really want our restaurant to provide a sense of community for our customers, where family and friends can come together and share quality time with one another,” Williams told Fox. “But as we all know, technology increasingly demands more of our time and can be a big distraction, even while we’re eating.”

But how about this instead: Chick-fil-A can keep its ice cream and customers can keep their phones. While Williams’ premise is correct that cell phone users are spending increasing amounts of time on their devices, cell phone use at the dinner table (or rather, fast food table) isn’t the attention-span-killing intimacy goblin critics think it is. Although these sorts of campaigns suggest that cell phones are taking us out of the moment, it’s not fixing the real issue—maybe we just need better moments.

Although these sorts of campaigns suggest that cell phones are taking us out of the moment, it’s not fixing the real issue—maybe we just need better moments.

Chick-fil-A is just one of a number of establishments that have sought to ban cell use. In the past year, the Great White Way has waged a war on devices, after beloved Broadway veteran Patti LuPone confiscated a smartphone from a patron who was texting during a performance of Shows for Days. Another famous incident involved an audience member climbing on stage at Hand of God to charge his phone; he later claimed he was drunk at the time.

Many restaurants have long asked customers not to take calls during meals, and Gilmore Girls fans likely remember the massive “No Cellphones” sign that hung in Luke’s Diner. But many of New York’s top chefs have taken it a step further to prohibit diners from taking photos of their meals to post on Facebook or Instagram. These include Chef’s Table at Brooklyn Fare—one of the city’s six restaurants awarded three stars by Michelin—and Momofuku Ko. At Chef’s Table, there’s even a warning on the menu about it.

Public opinion certainly is on the side of restaurateurs. In a Pew Research poll from 2013, a sizeable 68 percent of respondents felt that it was inappropriate to use your phone at the dinner table, even though a wide majority believed that cell devices were OK on public transit. These findings are a response to the frankly absurd amount of time Americans spend on their phones: According to U.S. News and World Report, millennials spend around five hours a day checking texts, tweeting, and answering emails from their pockets.

This technology drain can, indeed, be a distraction, and many educators feel cell phones have proven a huge detriment to the classroom learning process. In 2015, Miriam Morgenstern, a history professor at Lowell High School in Lowell, Mass., told the Boston Globe that students’ phone habits were making it difficult to be an effective teacher. “It’s pretty hard to compete with a very funny YouTube video,” she explained.

While cell phones often serve as an easy scapegoat for our culture of boredom and distraction, they are just that—a red herring. By the time people pick up their phones, they are already disengaged.

Considering the fact that the average cell phone owner checks their device 1,500 times per week there’s little argument that humans have a serious engagement issue, but despite its unpopularity, devices actually aren’t much of a hindrance to table conversation. The same Pew poll that found phones to be a mealtime faux pas also indicated that most users weren’t being distracted by their screens. Instead, these users were actually utilizing their devices to enhance the discussion.

Let’s take a closer look at the numbers. When Pew polled Americans on how they used their phones at social gatherings, very few indicated they were doing so to avoid discussion. Instead, the largest group (45 percent) responded that they were most likely to get on their device to post a photo of the event. Another 38 percent said that smartphones allowed them to “get information they thought would be interesting to the group.” According to Pew’s findings, 78 percent of users were engaging with their phones in ways that were productive for the overall gathering.

What of those users who were using their devices to disengage? While 25 percent of Pew respondents said that being on their phones was likely to distract them from what was happening around them, the problem was just as likely that they didn’t want to be engaged to begin with. Pew found that “16 percent used their phone because they are no longer interested in what the group was doing,” while “10 percent used their phone to avoid participating in what the group was discussing.”

This is incredibly telling. While cell phones often serve as an easy scapegoat for our culture of boredom and distraction, they are just that—a red herring. By the time people pick up their phones, they are already disengaged. If cell users were not texting as a form of occupying themselves, they would be just as likely to be not listening to the conversation, letting their mind wander, or staring blankly off into space. Technology is just a convenient explanation for a problem that’s much more difficult to solve—and not as easy (or trendy) to wag your ice cream at.

Americans should be putting down their phones more—or even better, learning to turn them off every once in awhile. But they should also be cultivating experiences that elicit and sustain their interest, rather than needing their phones to save them from the banality of their own mealtimes. If you need to focus on your phone while you’re eating in order to distract you from your fast-food chicken sandwich, perhaps you shouldn’t be eating at Chick-fil-A.