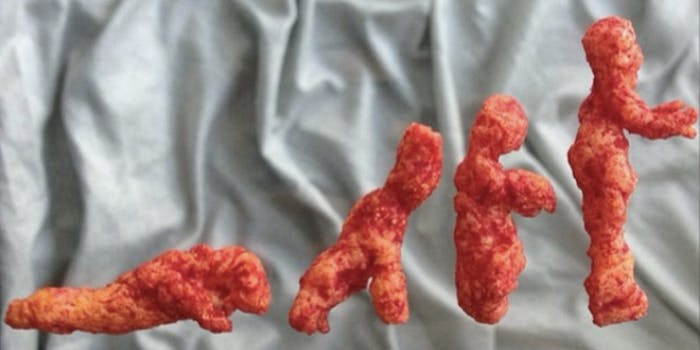 It’s not uncommon to hear about someone in the Phillippines opening a bag of potato chips and finding one inside that looks just like Jesus, or Mary Magdalene, or John Lennon, then inviting people from all over the world to come and pay homage to it.

But the folks behind the Instagram account Cheese Curls of Instagram, which we discovered when a Daily Dot employee posted a photo of a Cheez-It that resembled a Scrabble tile, have less lofty aspirations. They’re just trying to compile photos of cheese snacks that “resemble something,” be it Jesus or two people dancing or a starfish with a goiter coming out of its neck.

The result is a strangely addictive Instagram account that’s a bit like trying to identify scenes in a Rorschach test, except with high-fructose, 600-calorie snack treats. Like Rorshach inkblots, what you see in the Cheetos provides insight into your psyche and the way you see the world, and also like Rorshach inkblots, the way you see the world is X-rated 95 percent of the time.

Here are a few choice examples, as well as our best guesses as to what they’re supposed to represent. (As the owner of the account states, “Neither the Cheetos nor photos have been modified in any way.”)

Two people attempting to have sex in the shower, except they haven’t cleaned their bathroom in a while and the woman keeps sliding against the wall so the man has to keep hoisting her up.

A seahorse with a goiter coming out of its neck.

A mermaid with really bad form attempting to do the abdominal exercises in Tony Horton’s “Ab Ripper X” DVD.

An overweight Roy Orbison impersonator who just farted at a party, except instead of being embarrassed about it he’s all, “Whatever, I do what I want.”

We’ll defer to Cheese Curls of Instagram’s interpretation on this one: “After urinating on their subordinates to assert dominance, these two monkeys give each other a high five.”