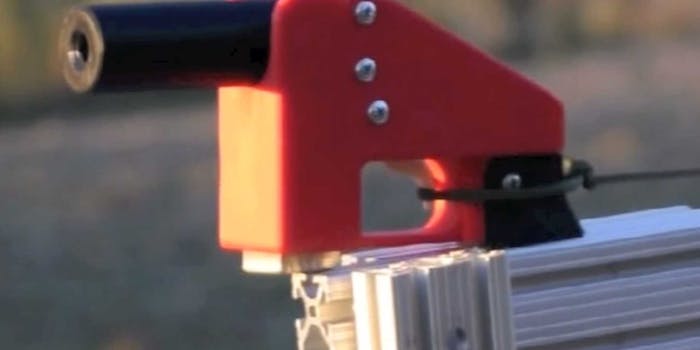 The movement to make 3-D-printed firearms readily available to anyone with an Internet connection just took another leap forward.

On Monday, Forbes’ Andy Greenberg revealed that a Wisconsin engineer had tested a handgun manufactured with a 3-D printer. Why is this a big deal? Because he did it using a Lulzbot A0-101, a low-end printer that costs $1,725. He also spent roughly $25 on materials, making this the cheapest gun to successfully fire to date.

“People think this takes an $8,000 machine and that it blows up on the first shot. I want to dispel that,” The engineer, who identified himself as “Joe” to protect his anonymity, told Greenberg. “This does work, and I want that to be known.”

The $8,000 machine is a reference to the device used by Cody Wilson and Defense Distributed to produce the “Liberator,” the world’s first printable handgun. Wilson and his associates made the firearm with a second-hand Stratasys Dimension SST printer.

In addition to being cheaper than Defense Distributed’s gun, the “Lulz Liberator”—Joe’s moniker for his plastic weapon—also fired more shots, nine to be exact. In the video below, we see Joe firing his weapon using a string to pull the trigger for safety purposes. The clip was filmed by Michael “HaveBlue” Guslick, another Wisconsin-based engineer known for designing the AR-15 lower receiver Wilson and his group used in their first video.

Much like its cousin,  the “Lulz Liberator” is not entirely devoid of metal components. The cheaper iteration of the weapon uses metal screws to hold the hammer in place, and employs a nail for a firing pin. All of these materials, however, are available at any hardware store.

It’s quite remarkable how quickly 3-D gun enthusiasts have taken the printable gun from concept to reality—it took them a little more than eight months (we first wrote about the topic in August 2012). Joe and Wilson’s videos are proof that 3-D weapons are very much real and there’s very little anyone can do to stop them.