Charlie Sheen's embattled sperm may have survived an otherwise toxic mixture of cocaine, testosterone, and tiger blood 23 years ago to impregnate a Norwegian stewardess.

If a Facebook campaign is any indication, Charlie Sheen’s embattled sperm may have survived an otherwise toxic mixture of cocaine, testosterone, and tiger blood 23 years ago to impregnate a Norwegian stewardess. 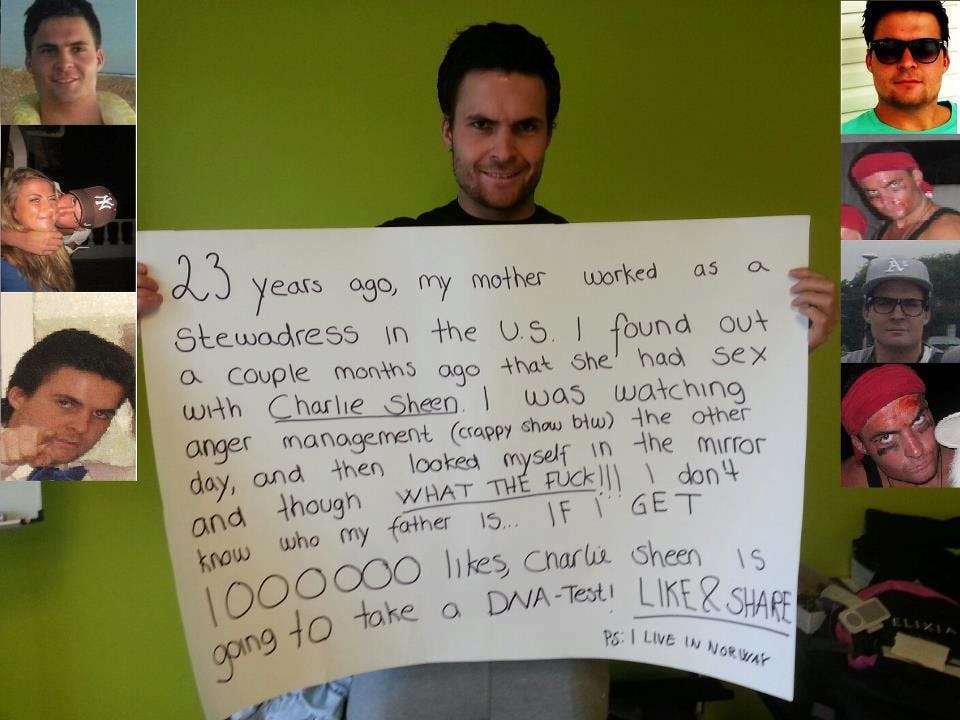 Norwegian 23-year-old Sverre Willumsen says Charlie Sheen is his father. He was watching Sheen’s Anger Management the other day (“crappy show btw,” he makes sure to point out to his maybe-dad) when he noticed striking similarities between the Hot Shots Part Deux star’s face and his own.

He claims his mother admitted she had sex with Sheen 23 years ago (just normal dinner conversation in the Willumsen household, apparently), and so Sverre put two and two together and concluded he must be Sheen’s Norwegian spawn.

To prove it, he’s launched a Facebook campaign to get Sheen to take a paternity test. All he needs are 1,000,000 likes. Right.

We’re sorry to say this, Sverre, but you don’t look anything at all like Mr. Sheen. This is just another obnoxious “like my post and I will do X” posts that have been spreading across Facebook like a plague in recent months. Still, the photo has gotten a quarter million likes since it went live Tuesday. Maybe Sheen will give in to the pressure and conduct a paternity test. Hell, he could use some publicity. Anger Management does kind of suck.