This guy got 1 million likes, which means he’s about to get laid

It only took 18 hours and 1 million likes, but in that time, Norway's Petter Kverneng went from hopeless to hopeful to downright ecstatic.

It only took 18 hours and 1 million likes, but in that time, Norway’s Petter Kverneng went from hopeless to hopeful to downright ecstatic. That’s because Petter Kverneng has now been granted the opportunity to sleep with a girl who’s long since held him in the friendzone—and he’s got Facebook to thank.

Kverneng, 20, and his 19-year-old friend Cathrine Johansen have known each other since high school, when the two were part of the same big group. They were always friends—nothing more, nothing ever. Anything else has long been strictly out of the realm of possibility.

On Thursday, the two friends were hanging out with several others when the conversation shifted to this week’s story about the girls who raised 1 million Facebook likes and forced their dad’s hand to buy the family a dog. The friends started spinning ideas of all the things they’d do if they were to raise 1 million Facebook likes, and the conversation naturally led its way to sex.

Within minutes, Kverneng and Johansen had drawn up an offer and snapped a photo for the testing: The two would sleep together if their photo could nab a hefty million. 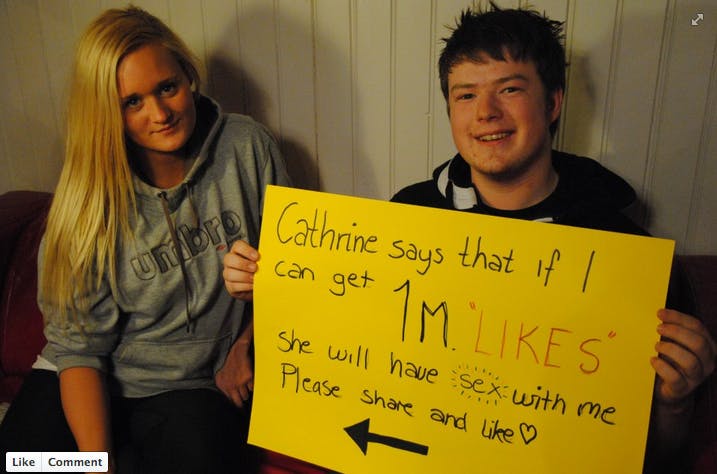 The two posted the photo onto Kverneng’s Facebook account that night. When they woke up, they realized how quickly the Internet can make a silly thing spread.

Kverneng’s Facebook post eclipsed the million-like mark only 18 hours after the two finished putting quotation marks around the “likes” on their poster. Kverneng spoke with local press when the likes count was closer to 500,000, saying that he expects the arrangement to go through as planned.

“It began as a joke, but now we’ll take it seriously,” he said. “We must of course keep what we promise.”

To which Johansen was a bit more reserved.

“We need to see if it reaches 1 million,” she said in response.

That part’s said and done. Here’s hoping the two end up working something out.