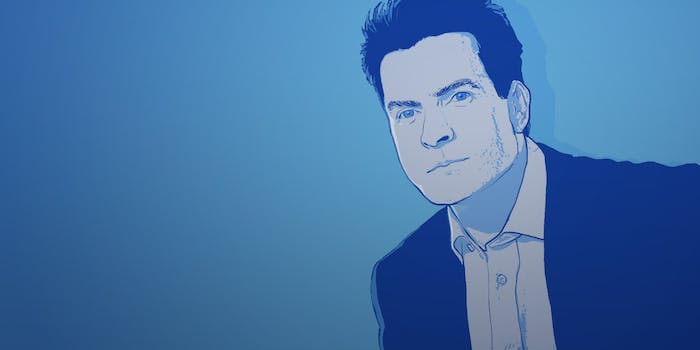 No one 'deserves' HIV.

Charlie Sheen told the Today Show‘s Matt Lauer on Tuesday that he was HIV-positive. The 50-year-old actor said he wasn’t sure how he contracted the virus, but he’d known about his status for four years.

Sheen admitted to having paid out as much as $10 million in blackmail to keep his condition secret. The timing of Sheen’s announcement was to get ahead of a piece by the National Enquirer about his condition. That story summarized how much of the public has since reacted to the news: “Decades of debauchery have finally caught up to Charlie Sheen.”

Sheen is a character best known for abuse. He’s abused his body with alcohol and drugs, and he’s unapologetically abused a litany of women. It’s tempting to see the heartbreaking announcement as his deserved comeuppance. But it’s an impulse that’s important to resist, even for a deeply flawed character like Sheen. Like everyone else living with HIV, he deserves sympathy. An HIV diagnosis may not be the death sentence it once was, but living with the disease is extremely difficult.

Instead of sympathy, of course, Sheen is being shamed.

Media outlets are framing the outing as the karmic justice for a notorious Hollywood womanizer who was hiding a deadly secret. Even those typically disinclined to side with notoriously sleazy tabloid are tweeting sentiments uncomfortably similar to the Enquirer lede, which characterizes Sheen’s admittedly high-risk sex as the cause of his diagnosis.

I spoke on a panel some years back with Robert Suttle from SERO Project, a network of people with HIV and allies fighting for freedom from stigma and injustice. Suttle spoke about how criminalizing HIV-positive people disproportionately impacts the already marginalized—including LGBT folks, people of color, and sex workers. Prior to becoming assistant director at SERO, Suttle served six months in a Louisiana prison, convicted under Louisiana’s “Intentional Exposure to AIDS Virus” statute. Suttle was prosecuted after he and a former partner, with whom he had a contentious relationship, stopped dating. The partner, who had previously threatened to file charges against Suttle, went to the police and did so just as soon as they broke up.

We are inadvertently reinforcing the misconception that having HIV is relevant to someone’s character or personality.

For people with HIV, a contentious relationship, personal misunderstanding, or even a minor infraction of the law can lead to a long jail sentence, public shaming, and registration as a sex offender. These unnatural consequences are a reason people don’t get tested and why, if positive, many struggle to disclose. People can be criminalized for their HIV-positive status regardless of whether they intended to harm anyone, regardless of whether there was any risk of harming someone, and regardless of whether any harm occurred. This is why people, even celebrities like Sheen, are entitled to medical privacy.

Indeed Sheen, despite his HIV-positive status, had essentially been medically cleared to continue having consensual sex by his doctors. As the Daily Dot noted on Tuesday: “Despite the assertions of a trusted medical professional who stated repeatedly that Sheen has consistently had an undetectable viral load (which makes the possibility of transmission extremely rare), the public panicked on Tuesday about the chance that Sheen could have passed on the virus to one of his many partners.”

Tabloid reports speculating on and judging Sheen’s sex life and struggles with drug abuse threaten to undo decades of tireless activism, which so far have been blessedly successful. Thanks to their educational front, perceptions about individuals with HIV have largely progressed. According to research by the Kaiser Family Foundation, public discomfort has decreased over the past several years. The number of people who say they’d be “very comfortable” working with someone who has HIV increased from about a third in 1997 to roughly half in 2011. The view that AIDS is a punishment has decreased since the early years of the epidemic (from 43 percent in 1987 to 16 percent today) or that it’s an individual’s own fault if they contract the disease (from 51 percent to 29 percent).

But this progress doesn’t jive with sentiments suggesting Sheen’s HIV status is something he somehow deserves. In other circumstances people have looked more critically at the “naming and shaming” of a celebrity for sexual behavior. Here, we’ve elected to pile on. In doing so we are inadvertently reinforcing the misconception that having HIV is relevant to someone’s character or personality.

Instead, we’re using Sheen’s personal tragedy as an opportunity to attack him for what he is guilty of— namely, for his well-documented mistreatment of women. In 1990, he accidentally shot his then-fiancée, actress Kelly Preston. Multiple media outlets have chronicled how, in the past 20 years, Sheen has allegedly assaulted, threatened, harassed, and abused women, including sex workers. So extensive and outrageous are these charges that there’s even a website devoted to keeping record: charliesheenabuseswomen.com.

Sheen’s list of offenses is long. In 1994, he was sued by a college student who claimed he assaulted after she refused him sex. Two years later, he pled no contest for assaulting adult film star Brittany Ashland. He allegedly ssaulted another sex worker, Capri Anderson, who filed a criminal complaint detailing a situation in which she’d locked herself in a Plaza Hotel bathroom after Sheen went on a rampage. In 2006, his then-wife Denise Richards filed a restraining order against him, saying Sheen had shoved and threatened to kill her. In 2009, Sheen’s third wife, Brooke Mueller, called 911 after Sheen threatened her with a knife. Once separated, Mueller requested a temporary restraining order against her former husband, alleging he had threatened to cut her head off, “put it in a box and send it to your mom.”

Most of these cases were settled out of court. In cases where criminal complaints were filed, no arrests were made. In rare instances, Sheen has been made to pay fines and put on probation, penalties which had no obvious impact on his behavior. While the women Sheen victimized are further victimized by the media, Sheen escaped responsibility and remained, in 2011, the highest-paid actor in television. (He made a stunning $1.2 million an episode for his performance on CBS’s Two and a Half Men.)

Even Sheen’s HIV-positive status reveal is reprehensible. By explaining away his diagnosis as the result of having “dazedly chose[n] or hired the companionship of unsavory and insipid types” with “saltless reputations,” he threw the women he slept with under the bus yet again, blaming them in the same unfortunate way we are blaming Sheen for an unanticipated result of presumably consensual choices. It’s evidence that Sheen continues to take advantage of the fact that people don’t typically have a lot of sympathy for women, and it’s disgusting.

By all means, let’s call him out for this. Let’s just not criticize him for having HIV.

Melissa Petro is a freelance writer living in New York City. She has written for Salon, the Daily Beast, and the Huffington Post.