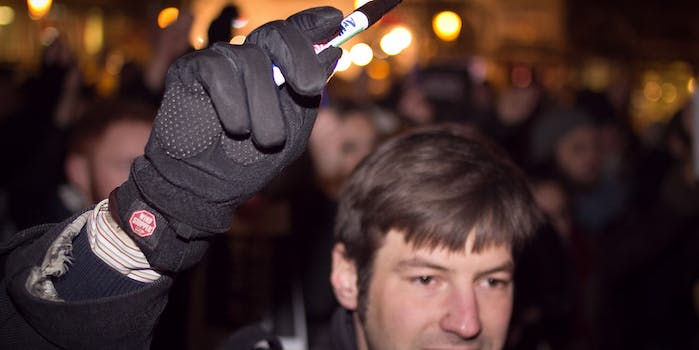 For the sake of those gunned down at Charlie Hebdo, we need to preserve the right to biting political commentary.

On Wednesday morning in Paris, the satirical magazine Charlie Hebdo was attacked by gunmen who shot down 12 of France’s leading cartoonists, satirists, and editors along with two police officers—supposedly in revenge for satirical cartoons about the Prophet Mohammed—and then vanished.  Many hours later, the streets of central Paris were still ringing with sirens and anxious voices, and the news coverage is typical of the aftermath of any tragedy: sad, angry, attempting to contextualize and understand the violence. But this was not a random burst of murderous terrorism; it was an attack on satire itself, and the way in which it shapes our world. It shows both the power and the danger of what might look, on the surface, like just a bunch of jokes, but is in reality vitally important to democracy and personal freedom.

So, why Charlie Hebdo? Stephen Colbert, The Onion, and the other satirists we love—who skewer the established, the important, and the deeply respectable with wicked, irreverent humor—aren’t a modern creation of the ironic age. Satire’s not just old; it’s ancient, from far before the invention of television, newspapers, or even the pen. We’ve been doodling mocking things about people in charge since the beginning of recorded civilization, from the Egyptians onwards.  (They liked to depict their public servants and upper classes getting really, sloppily drunk.)

And France is basically the birthplace of its modern incarnation: you may love Gustave Doré’s pretty engravings of fairytale characters, but he’s also beloved in France for being the first ever major satirical cartoonist, making it into a respected industry. So the Charlie Hebdo massacre is not only horrific in a contemporary sense: it was calculated to go right to satire’s modern heart.

The real reasons for the murders are murky; while the gunmen yelled about the offense to Prophet Mohammed caused by previous Charlie Hebdo cartoons, they might have been shrouding other agendas. But it’s a wake-up call as to just how risky satire is, partially because it seems so light, so innocently flippant. Violence over a satirical publication is, for historians of the medium, neither new nor unexpected: a well-done cartoon, interpreted in a second and shared in two, can spread wider than any intellectual editorial could hope to go. And that, if you don’t want anybody questioning the status quo, is dangerous.

Regime leaders have known, and been uneasy about, satire’s power for a long time. Mockery is, after all, very upsetting to people who feel they’re doing Serious Business. The French king Louis Phillipe (again with the French connection) imprisoned the cartoonist Charles Phillipon in 1832 for, innocently enough, pointing out his facial resemblance to a pear. It seems light-hearted, but for a king unused to any disrespect, it was capital treason. Napoleon really loathed caricaturists, many of whom pictured him as short and ridiculous, while Stalin cannily kept a satirical cartoonist in-house to produce propaganda for his newspapers. King of modern image control Vladimir Putin allows no satirical productions at all.

Satire is at the heart of democratic thinking. Nothing—no sacred cow, no respected institution, no celebrity—is out of bounds. It’s the ultimate freedom of expression to bring everything to the same (ridiculous) level: a mark of a society’s respect for truth over pomposity, thought over reverence. Targeting it targets the essence of free thought. The Charlie Hedbo attack is not about Islamic hatred against Western freedoms, either: as Nahrain Al-Mousawi points out, satire is used across the Arab world to scuttle rhetoric and extremism, often at high personal risk.

Reassuringly, the response of the media hasn’t been to scuttle away from the satire of Charlie Hebdo in fear; it’s been to support them and republish their work, in defiance of any horrific attempt to silence it. If anything, the massacre seems to have backfired badly: what was possibly meant to inspire fear or caution among Western satirists has brought them out in angry, grieving droves on Twitter. People flocked to Paris’s Place de la Republique last night to hold up pens and pencils in solidarity.

The specific rationale of the Charlie Hedbo killings has yet to be determined, but it’s crucial that our main focus not be the question “Did they go too far?” For one, satirists need to go too far, to show just where the line is. For another, it’s not the job of the satirist to keep things inoffensive or to try to offend everybody equally, like a teacher handing out trophies to every kid in class. Satire, like any instrument, can be badly used or misfire—but the point is that the instrument itself must remain part of our arsenal.

Satire has, in the Western world, seemed safe and domesticated, an unthreatened part of life you can turn to when you feel like watching The Comedy Channel or YouTube for a few chuckles. This tragedy has shown that it’s far more: an essential part of the life of a democratic society, where every pompous politician and self-righteous celebrity knows they’re at risk of being stung. It’s threatening, galvanising and upsetting, and it must stay that way.