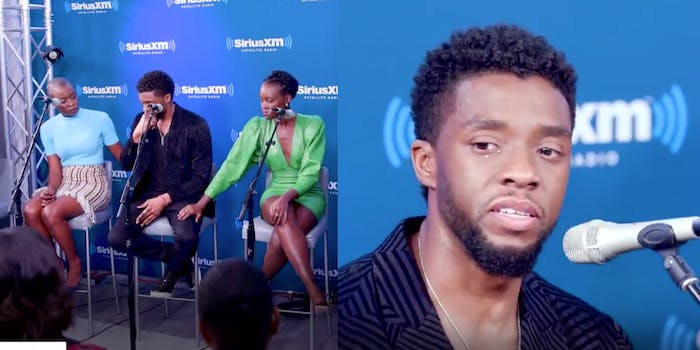 The interview is even more heartbreaking following the actor's death.

A video of actor Chadwick Boseman getting emotional talking about two kids with terminal cancer who were looking forward to the Black Panther release is even more of a tearjerker following his death from colon cancer.

The clip was pulled from a 2018 SiriusXM interview with the cast of the movie. Barstool Sport’s Chicks in the Office podcast tweeted it out in the hours after his passing with the caption: “This 2018 clip of Chadwick Boseman getting emotional about the impact Black Panther had on two little kids with terminal cancer is especially heartbreaking, knowing now that he was fighting the same fight. RIP.”

In the video, Boseman talks about his relationship with Ian and Taylor, two young boys with terminal cancer, whose parents said they were “holding out” for the Black Panther release.

Boseman said knowing how much the movie meant to the them and that they were fighting to watch it was one of the things that pushed him to get up in the morning, workout, and learn his lines.

Initially, Boseman was confused why the movie took on so much meaning for the boys, “But seeing how the world has taken us on, seeing how the movement is, how it’s taken on a life of its own, I realized that they anticipated something great.”

Toward the end of the clip, Boseman struggled to get the words out that the boys died before the movie’s release. “And when I found that they…” The interviewer told him to take his time, but the heartbreaking words wouldn’t come out.

“So yeah, it means a lot,” he managed to say with tears in his eyes.

People online were moved by the interview, some brought to tears. A number echoed the podcaster’s sentiment, noting the additional layer Boseman’s own diagnosis adds to the already emotional interview.

“Knowing now that he was diagnosed in 2016 gives this moment so much more weight and significance. We were blessed to have a man with such a big heart for the time he was with us. Long live the King,” wrote Twitter user @GebsNDewell under the video.

Boseman was diagnosed with colon cancer four years ago, but his diagnosis was not publicly known. He began filming the historic film in 2017 and starred in a number of other movies since.

“All were filmed during and between countless surgeries and chemotherapy. It was the honor of his career to bring King T’Challa to life in Black Panther,” his family said in a statement.