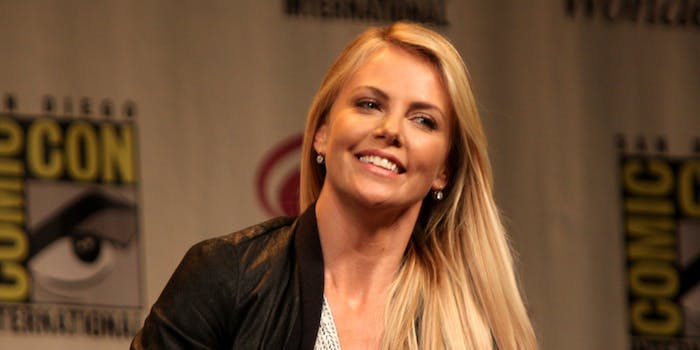 Why female celebrities compare media coverage to being raped

This is anything but a first world problem. It’s an everywhere problem.

Actor Charlize Theron recently became the latest celebrity to compare paparazzi intrusion and hateful media coverage to being sexually assaulted. Theron was asked in an interview if she ever Googles herself and responded, “I don’t do that, so that’s my saving grace. When you start living in that world, and doing that, you start I guess feeling raped.”

Theron explained that she feels protective of information about her son and her private life, for instance, and tries to avoid reading comments and stories about herself and her family. “Maybe that’s just me,” she added. “Some people might relish all that stuff but there are certain things in my life that I think of as very sacred and I am very protective over them.”

Kristen Stewart, too, ignited controversy by making similar comments in an Elle UK interview in 2010. “What you don’t see are the cameras shoved in my face and the bizarre intrusive questions being asked, or the people falling over themselves, screaming and taunting to get a reaction,” she said in the interview. “The photos are so…I feel like I’m looking at someone being raped. A lot of the time I can’t handle it. It’s f—ed. I never expected that this would be my life.”

Similarly, Gwyneth Paltrow compared media coverage to fighting in a war. “You come across [online comments] about yourself and your friends, and it’s a very dehumanizing thing,” she said in an interview with Re/Code. “It’s almost like how, in war, you go through this bloody, dehumanizing thing, and then something is defined out of it. My hope is, as we get out of it, we’ll reach the next level of conscience.”

Many naturally dismiss these comments as the rantings of privileged people who don’t understand how fortunate they are or how disrespectful they’re being to those who have survived sexual assault.

It’s true that using rape as a metaphor for other types of unpleasant experiences can trigger or otherwise hurt survivors who may be listening and obscures the fact that sexual assault is unique as a crime. It doesn’t work as a metaphor for getting beat in a video game or failing an exam or reading mean comments about you online because sexual assault is an act of violence that is about both sex and power. It is about violating someone’s bodily autonomy in a sexual way, and it is about exerting dominance over them.

Online comments about celebrities may be mean-spirited and horribly unpleasant, but they are generally the casual lashings-out of people who don’t seriously imagine that their remarks will ever be read by their subjects. That doesn’t mean it doesn’t hurt, of course. A lot of things hurt that aren’t rape or anything like rape. We shouldn’t need to call something “rape” to convey the fact that it hurts.

So why do celebrities keep doing it? I can think of two reasons, and neither have much to do with those celebrities being spoiled and ungrateful for their fame.

Much of the response to comments like Theron’s and Stewart’s has focused not on what I just explained—the reasons you shouldn’t use rape as a metaphor—but the fact that they have “no right” to complain because they “asked” for the media attention by “choosing” to be celebrities. I’ve already discussed why I find this view creepy and wrong here, but the gist is this: the only thing that being an actor inherently means is that you probably like acting. The only thing that being a famous actor inherently means is that other people probably like your acting.

Neither of these things inherently means that you enjoy having cameras shoved in your face, having reporters ask you creepy questions about your personal life, reading speculation about your body and your children and your relationships in the press, and receiving hundreds of hate comments/mail every day from random people you’ve never met calling you ugly, fat, stupid, talentless, and so on.

It follows that celebrities might not feel like they can get much sympathy for what they have to deal with unless they describe it using graphic metaphors like rape and war. Of course, it doesn’t seem that using such metaphors gets them much sympathy, either, but I understand why they’d try. That doesn’t justify using language that hurts and marginalizes people, of course, but it might help explain it.

The second reason is that, while rape is not an appropriate metaphor for anything besides itself, there are a few parallels between it and the sort of intrusive paparazzi attention that celebrities, especially female celebrities, face.

What Theron and Stewart seemed to be trying to articulate is that media intrusiveness feels violating, almost like a negation of their right to privacy and autonomy. Having your life investigated and then sold to the public in such a lurid way means losing control over things that, to borrow Theron’s phrasing, you think of as sacred.

Violation of autonomy and loss of control are central aspects of the experience of sexual assault for many people. Maybe that’s what celebrities who use rape as a metaphor are trying to express in order to try to explain to people how it feels.

This gets lost in the ensuing discussions about “out of touch” pampered rich people and “first-world problems.” But even pampered rich people deserve freedom from people harassing them and selling information about their personal lives to audiences of millions, and the feeling of entitlement that many people feel towards other people—to their bodies, to private information about them, to entertainment from them—is anything but a first world problem. It’s an everywhere problem.

Miri Mogilevsky is a social work student who loves feminism, politics, New York City, and asking people about their feelings. She writes a blog called Brute Reason, tweets @sondosia, and rants on Tumblr. If you would like to be Miri’s best friend, send her cool psychology studies.