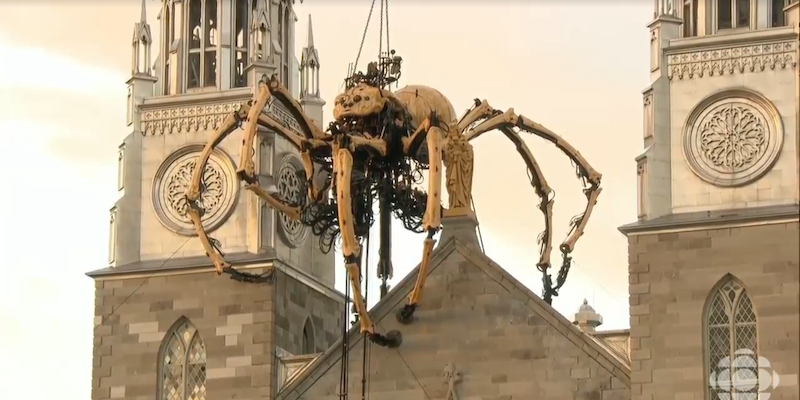 A giant robotic spider has some Catholics very upset.

This week marks Canada’s 150th birthday and the city of Ottawa wanted a unique way to celebrate. And what better way than to bring in a bunch of giant robot monsters and let them fight each other? The robots were constructed by La Machine, a French production company that’s been around since the early 1990’s.

But not everyone was amused by the spectacle. Specifically, members of the Catholic Church were unhappy with “Kumo” a 40-ton mechanical spider who made himself comfortable atop Ottawa’s Notre Dame Cathedral.

According to an email interview Archbishop Terrence Prendergast did with Catholic News Service, people complained that the spider was “sacrilegious,” “demonic,” and “disrespectful.”

“I don’t understand how allowing a mechanical spider to stand on the cathedral is anything but disturbing, disappointing and even shameful,” one woman wrote on the archbishop’s Facebook page.

“My cathedral staff and I anticipated that some… might object,” said Prendergast, “but thought it would be minimal, as nothing demeaning was intended in the spider being near the church,”

“I regret that we had not sufficiently understood that others would see this event so differently. I say to those who were shocked that I understand that this would have been upsetting for them and that I regret that a well-intentioned effort to cooperate in a celebration was anything but that for them.”

If you’re not too offended you can check out this video of Kumo in action. He’s battling it out on the streets of Ottawa against Long Ma, who appears to be a dragon/horse combo. It’s a tough fight, but as any student of history will tell, not as tough as taking on the Catholic Church.