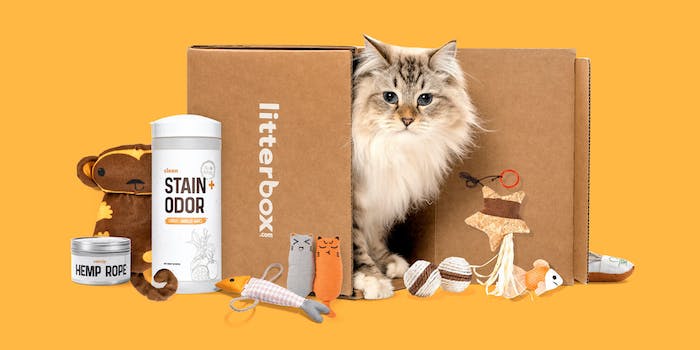 Keep your cat happy during quarantine with this amazing subscription box

Please your cattos with some intense catnip goodies.

Thanks to the trendy rush of subscription boxes over the last few years, you can order everything from socks to snacks from other countries and have them show up promptly on your doorstep once a month. It was fun before we were trapped in our house for fear of contracting the coronavirus, but now getting good things in the mail feels more like a lifeline, a little burst of joy and hope to give you something to smile about.

If you’re a cat owner, you already know they need a lot of amusement to keep their strange pleasures sated, but getting new toys from Amazon isn’t as easy as it used to be. Enter Litterbox.com’s Subscription Box, which is made by the same folks that created the famous self-cleaning Litter-Robot (yes, that pricey spaceship that all cat owners pretty much dream of owning).

There’s nothing groundbreaking about a cat toy subscription box, you say? I would have agreed with you until I opened this one and saw my two cats go into a frenzy over the contents. I think it’s due to the catnip Litterbox uses, which seems to be just about the dankest shit my pets have ever gotten their paws on.

Funnies aside, the catnip in Litterbox’s toys is a blend of organic (yay) and silver vine grown and harvested on a Washington farm, and I am very impressed by it. I’ve given them many catnip toys that have held their interest for a day or two. But a solid month later my eldest cat still guards his favorite toy from the Litterbox selection like it’s going to be torn from him in a street fight. It’s pretty hilarious, truthfully.

While I can’t say what comes in each box as I am sure it changes every month, it’s a generous selection for the $30 price tag. Ours came with a selection of catnip-stuffed toys, a bottle of cat shampoo, a container of stain wipes that are extremely handy if your cats like to barf on your furniture (ahem), and a rechargeable USB laser pointer in a fancy little metal box. It works well for me as I have several cats, but if you only have one you also can choose how often you get the box as well, so stagger it every few months if it works better for you.

Litterbox also sells all its products a la carte, so if you prefer to buy things for your furbabies that way instead you can do that as well. If you don’t know where to start I highly recommend the Hemp Mouse toy, which is the aforementioned one that my eldest hoards like gold.