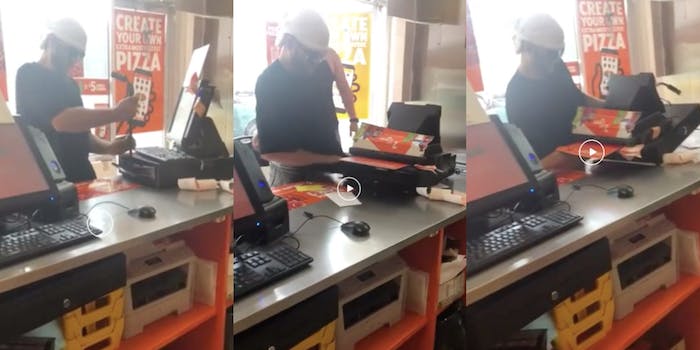 Late Thursday evening, a video was uploaded to Reddit’s PublicFreakout forum, showcasing a recent robbery at a Little Caesars. Employees recorded the robber while he struggled to open a cash register. In the background, one staff member can be heard calling the police while the other staff member jokingly critiques the robber for his ineffective method.

The nearly one and a half minute clip is both suspenseful and hilarious. “That’s all you got, bro? $60, bro…,” an employee asks the robber who is still struggling to reach all of the money in the machine. After nearly a minute of trying to pull the register’s drawer completely open, the robber gives up. “That’s all you’re gonna take?” the employee asks as the man exits the building.

Barely disguised and only wearing a hat and sunglasses to cover his face, the robber seems to be a novice in the world of theft. Just as he walks toward the door to leave, an employee informs other staff members not to touch any of the equipment that has been handled by the robber, causing the robber to turn around and re-enter the store. When some might assume he is returning with a weapon, the robber lifts the edge of his shirt to wipe down the register. “No fingerprints, huh?” the employee asks him.

A confused customer then enters the building, watching as the robber attempts to clean his fingerprints from the device. Then the robber manages to pull out more cash from the register, completely defeating the act of cleaning it off. “You might as well take the whole register,” the employee suggests to him.

The bystander, who seems unsure of how to react, turns to follow the robber outdoors when employees advise him to leave the situation alone and that the store is closing for the time being. “The store is shut down,” an employee laughs, right before the clip shuts off.

An update on the incident has not been announced, but we can expect the thief won’t attempt robbing a store in broad daylight again without adequate preparation and assume that no one was harmed.