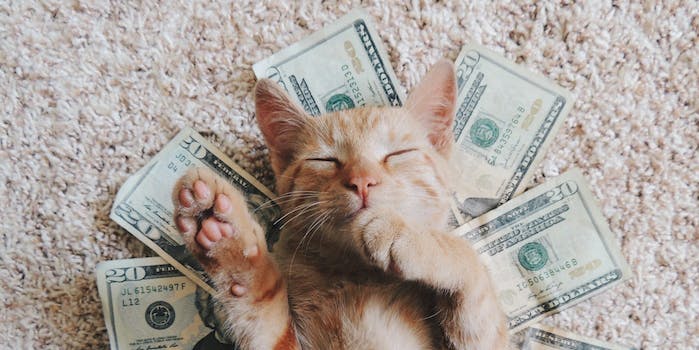 Will Zweigart is the Internet impresario behind the multi-platform viral sensation CashCats.biz—a crowdsourced collection of cats rolling in Jacksons, Grants, and Benjamins. But he’s found himself spending some fat stacks of his own to retake control of a hacked Instagram account.

Yesterday, Zweigart explained the situation on his Facebook page: Having failed in his attempts to reach “a human being” at Instagram (or its parent company, Facebook) regarding the problem of his seized photo feed, he decided to take out ads on their own network in order to beseech the powers above for an intervention—or help of any kind, really.

Although CashCats.biz has nearly half a million followers across several channels, Zweigart told the Daily Dot in an email:

“Instagram is undoubtedly the heart and soul. I was actually getting ready to launch a new campaign this holiday to benefit an animal charity here in NY (the site has raised over $10,000 for animal services to date through art shows, custom merch, etc.). So when I saw the account was hacked, and how difficult it is to get something like this resolved, I had a full freakout.” 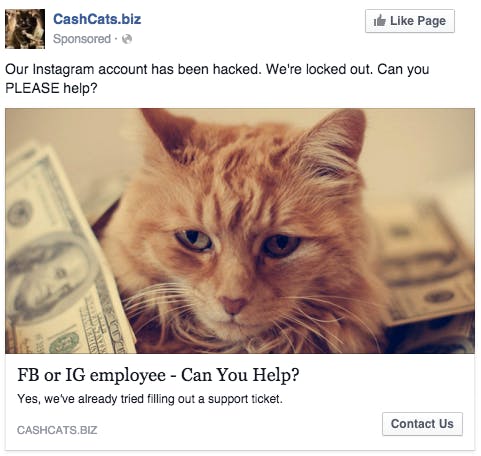 Though Zweigart filled out multiple support tickets after realizing he’d been hacked, he was well aware that Instagram could take days to respond, as in the case of a popular food-based account.

“I work at a digital/social agency (ironically, in many cases helping brands utilize these platforms to provide customer service), so we had a few contacts with ad reps at Facebook and Instagram,” he told the Daily Dot. For the most part, these employees admitted they were unable to help in any significant way—and besides, Zweigart wrote, “You shouldn’t need connections to get support—although as they say, social network users are not the customers anyway, we’re the product.” 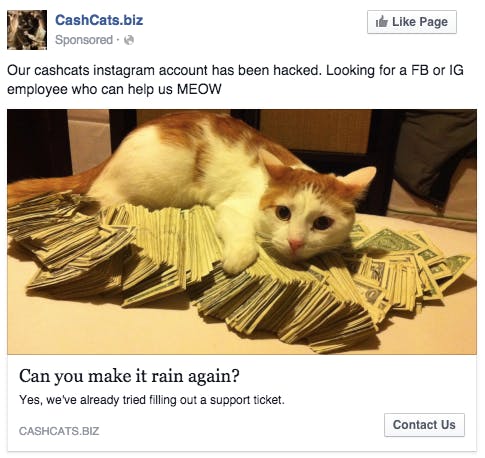 So it seemed targeted advertising was the only solution. Zweigart decided he “would reach out to a few more folks at FB/IG as a ‘customer’ on their advertising platform,” he wrote, continuing:

“So far I have three ad units with a budget of $50—they have reached 4,500+ Facebook or Instagram employees who work in CA or NY and like cats. Ad #1 seems to be performing the best with the highest reach and lowest cost per click (CPC), so the sadder the cat the better, maybe? Hopefully I won’t have to pay them to ignore me much longer. Imagine if every angry customer was running ads to get their issues addressed with a phone or insurance company, etc. We’re almost there.” 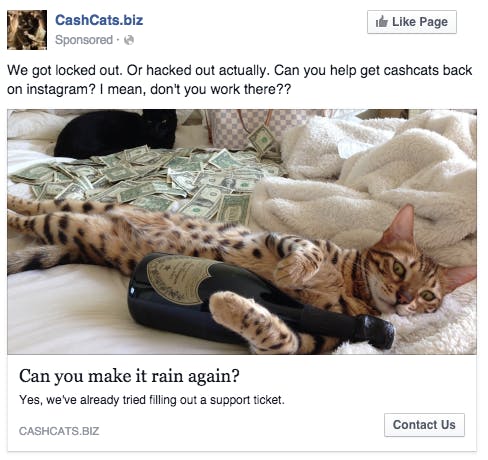 The CashCats Instagram account is currently unavailable, though Zweigart doesn’t know whether the hacker moved it offline or the company shut it down for security reasons. He did finally hear on Wednesday morning that someone was “working on” the issue.

“I’m a HUGE fan of Instagram,” he remarked, “and certainly don’t wish to anger our new Menlo Park overlords. I’m hopeful we can get this worked out—AND that Instagram will strengthen its security and customer support tools for everyone. They have a huge challenge with that many users—it won’t be easy—but they’re also topping $4 billion per quarter in ad revenue, so that should help a bit.”

“Keep your loved ones and logins safe—it’s scary out there,” he added.

Update 2:29pm CT, Oct. 7: Zweigart has confirmed in another email to the Daily Dot that he once again has control of his Instagram account and is shutting down the ads, noting that he is “very thankful to the IG team for stepping up.”