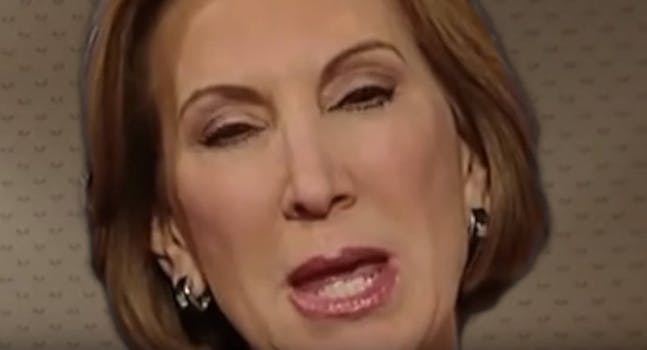 This will haunt your dreams.

Everyone was surprised when GOP presidential candidate and human man Ted Cruz made the unusual move of announcing a running mate before the end of the primary elections. They were more surprised when that running mate, Carly Fiorina, introduced herself by singing a little song about how much she loves Cruz’s two daughters.

It was perhaps intended as a sweet and humanizing moment from someone who’s been criticized for showing little emotion, but some saw it differently. Very differently. Look upon this nightmarish, Lynchian remix of Fiorina’s song from video editor Vic Berger IV and feel your soul attempt to slide out of your corporeal body.

Holy shit. This is a Cruz-Carly campaign dispatch from inside the Black Lodge in Twin Peaks. The popular sense that Cruz’s own family may not feel warmly toward him has been amplified to the highest degree. There is hellfire and there is some tastefully implied witchcraft. We’re looking at a work of avant-garde brilliance here.

This is likely not your first encounter with Berger, who was recently praised by the New Yorker for his bizarro brand of political satire. If nothing else, you’ll have seen this clip of failed presidential contender Jeb Bush proudly naming Apple products. MacBook Pro, baby!

His past work mostly decontextualizes actual clips of the candidates, laying bare their most obvious flaws. Jeb = awkward; D. Trump = tiny little fingies—but this new one places the Ted and Carly show in a new context. The context of actual hell.

And, in a happy bit of comedic timing, it arrived just before this video of Fiorina seemingly disappearing into a hole at a Cruz town hall.

holy shit it's like she just vanishes into a hole, out of shame https://t.co/2qddH9Bmmo

There are 189 days left in this election.