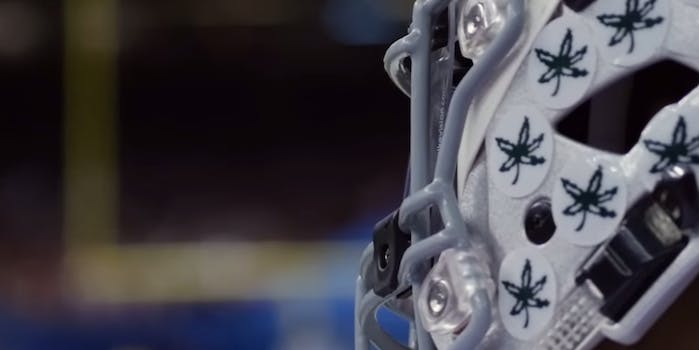 In which Ohio State's Cardale Jones invents a new holiday.

On Friday national championship-winning Ohio State quarterback Cardale Jones in a series of tweets implied that he was transferring to Akron. 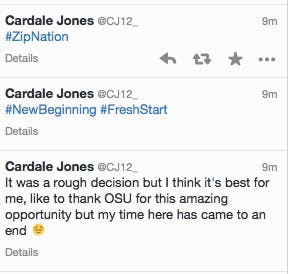 Then he tweeted: “May Fools.”

In so doing Jones invented a new holiday. Some people may not like this kind of pranking. I am not one of those people.

First of all, Jones is great. After sitting on the bench for three years, a series of injuries at Ohio State forced him into the starting position for three games. Those games were against juggernauts Wisconsin, Alabama, and Oregon, and he dominated all three of them en route to a title.

He did so with a beautifully thrown deep ball, and a bruising running style. It’s tough to root for Ohio State, but it’s easy to root for Cardale Jones.

It’s also nice that the day after football fans had to watch suspected sex criminal Jameis Winston get taken first overall in the NFL draft, we can have our attention pulled back to a player who is both good at football and also not presumed to be a sex criminal.

This is also great for a number of sillier reasons. Ohio State (I’m sorry… The Ohio State University) has a collegiate fanbase that ranks amongst America’s most inusfferable. Understandably so; they have a storied history, they employ the one of the two best coaches in America, and they have a QB depth chart stronger than that of an NFL playoff team last year (looking at you Ryan Lindley and the Arizona Cardinals). That their fanbase had to suffer through a potential QB defection for a few minutes is to be celebrated.

Also, their excellent head coach, Urban Meyer, has the sense of humor of a potato that has been hooked up to one of those clocks that runs off potatoes only now it doesn’t run because whatever part of a potato has energy in it has been completely depleted. I weep for the poor student-assistant who has to explain this whole situation to him, but I can’t help but laugh picturing Meyer’s face getting redder and redder.

Also, the Internet anti-prank brigade has gotten out of hand. To my eye, Anti-April Fools’ sentiment vastly outweighed actual April Fools’ tomfoolery this year. And yeah, April Fools’ is terrible because telegraphed pranks are terrible. So too fake viral nonsense where there would be no reason to suspect a prank is afoot. But some pranks are not nearly as terrible, and this is one of those less terrible ones! Not only was it the right perpetrator, and the right duration (two minutes), it also let me think about Urban Meyer getting flustered at Twitter! Perfect!

The only loser here is poor Akron Zips fans, who just for one moment might have thought that things were about to go their way, and they would emerge from the shadow of The Ohio State University. Alas, they will not. Even the best pranks have unfortunate side effects.