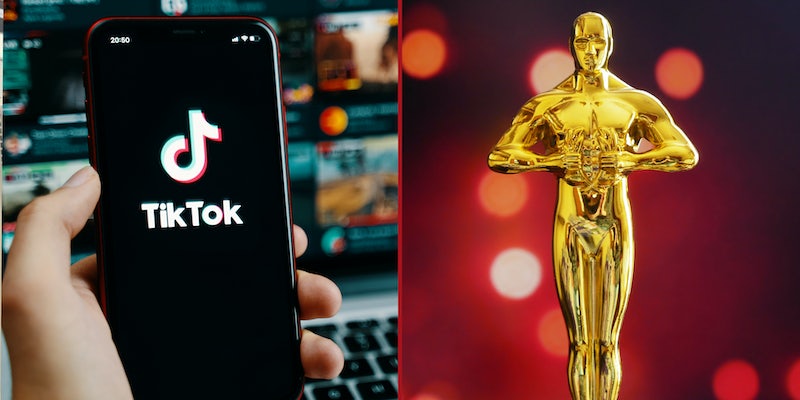 These are the TikToks people think deserve awards

Cannes Film Festival announced a partnership with TikTok, and now people are wondering which videos are Oscar-worthy.

Earlier this week, the Cannes Film Festival announced that TikTok is now an official partner of the festival and launching a global in-app competition in which people can submit videos between 30 seconds and three minutes long for a chance to win one of three prizes at the festival. On paper, the contest, which is also referred to as #TikTokShortFilm, might sound silly. But it’s also sparked a celebration of some truly award-worthy TikToks.

The move by Cannes is a smart one in part because it’s trying to meet younger audiences where they are to get them interested in a film festival they’ve probably never been to. And it’s far from the only film industry stalwart trying to target younger audiences and potential future filmmakers; the Oscars, for instance, just revealed in its first promo that it will air the first-ever live performance of “We Don’t Talk About Bruno,” the most popular song in the country right now (which isn’t up for any Oscars), as part of its controversial effort to cut the runtime and get more eyeballs to watch the ceremony.

While winning that award at Cannes alone probably wouldn’t qualify TikToks for next year’s Oscars—there’s no minimum run time in the list of rules for Oscar shorts (up to 40 minutes max), but the most up-to-date list of qualifying film festival awards aren’t recent enough to include Cannes’ TikTok awards as an eligibility marker—there’s not to say that the level of creativity and ingenuity behind TikToks isn’t, in essence, worthy of an award.

The link between TikTok and the Oscars came courtesy of Hanna Phifer (@WrittenByHanna), who tweeted out, “Which tikok do yall think deserves an oscar.”

It’s a simple question, and one with no qualifiers attached to it, real or otherwise. But it opened up a wealth of possibilities that also reminded us of some top-tier TikToks that are more than worthy of watching on repeat.

“She invented tik tok,” beetlejordan captioned a TikTok of Reese Hardy dancing while crying to Mariah Carey, which went viral in 2019.

Some responses even differentiated with specific Oscars that certain TikToks were worthy of winning, such as best original screenplay and best actress.

We even saw some repeat TikToks show up.

More details on Cannes’ TikTok competition, including which director will preside over the jury for #TikTokShortFilm, will arrive later. But if TikToks can break through to Cannes, there’s no telling just how far they could one day go.