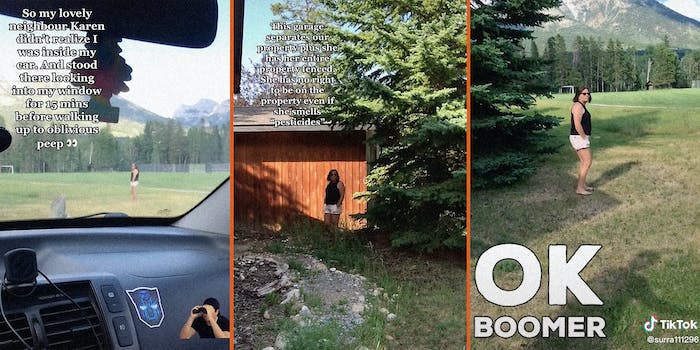 ‘Can you stop peeping into my window?’: TikToker catches Karen snooping through her home, pretending she smelled something

It apparently wasn't the first time it happened.

A woman’s TikTok video in which she caught her neighbor peeking into her apartment window has gone viral.

In a video posted a little over a week ago (and has since been viewed nearly 1 million times) TikToker @applesbpd said that her neighbor, who she referred to as a Karen, was watching her apartment. According to @applesbpd, she had been watching Karen for 15 minutes without the Karen noticing that her neighbors were home.

It wasn’t until Karen came closer to the apartment to allegedly peek through a window that @applesbpd stepped out of her car to confront her.

“Excuse me, can you stop peeping into my window?” @applesbpd said.

When asked what she was doing on her neighbor’s property, the Karen said that she had smelled pesticides and claimed that she had the right to investigate it because the garage is considered public property, but @applesbpd isn’t buying it.

“This garage separates our property plus she has her entire property fenced,” @applesbpd wrote in the video. “She has no right to be on the property even if she smells ‘pesticides.’”

@applesbpd’s fiancé eventually starts talking to their neighbor about it while she went back to the car, but as she noted, it’s not the first time that there has been an issue with their neighbor.

“This isn’t the first encounter either… can’t be young and live in peace because I guess I’m a hooligan,” @applesbpd wrote.

In a follow-up video, @applesbpd responds to a commenter who suggested confronting the Karen with a gun. She noted that because she lives in Canada, she could be arrested for doing so, even if the Karen had broken into her house. She did note that she filed a report with the Royal Canadian Mounted Police.

“After the occurrence I called the RCMP and made a report,” she wrote. “Today I was called and told she will be visited from an officer.”