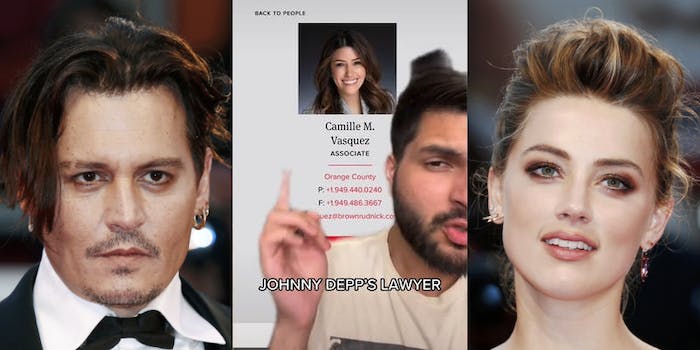 A TikTok creator’s video asking the firm employing Johnny Depp’s attorney, Camille Vasquez, to make her a partner after the ongoing defamation trial between Depp and his ex-wife Amber Heard finds its resolution has garnered viral attention on the platform.

More than 213,000 people have viewed the video of @haseeblegal, a lawyer himself, calling on Brown Rundick to take this step after the trial, following Vasquez’s cross-examination of Heard’s testimony during the trial.

“Johnny Depp’s lawyer, Camille Vasquez, who did cross-examination of Amber Heard today is an associate,” @haseeblegal says in the video. “The disrespect. I’m a lawyer but I don’t even need to be a lawyer to tell you that that is talent.”

@haseeblegal praised her courtroom presence and skill, saying that with her performance in the Depp trial, new opportunities might become available to her.

“The courtroom presence; the command of the witness; forget this associate crap, if Brown Rundick is not making Camille Vasquez an equity partner, maybe even a named partner—Brown, Rundick & Vasquez—if that’s not happening, girl leave,” he says. “Leave that firm, start your own thing, your price went up.”

Commenters agreed, sharing their own praise of Vasquez’s work.

“She’s a talent that’s why she did that cross examination,” one commenter wrote. “Having a woman question Amber was genius.”

“Camille is so strong and doesn’t give her space for Amber’s (bullshit) she definitely (has) done an amazing job,” another commenter wrote.

“After this case she can open her own firm she is going to get so many cases after this,” a commenter wrote.

The Daily Dot has reached out to @haseeblegal via Instagram DM, as well as to Brown Rundick directly via email regarding the video.