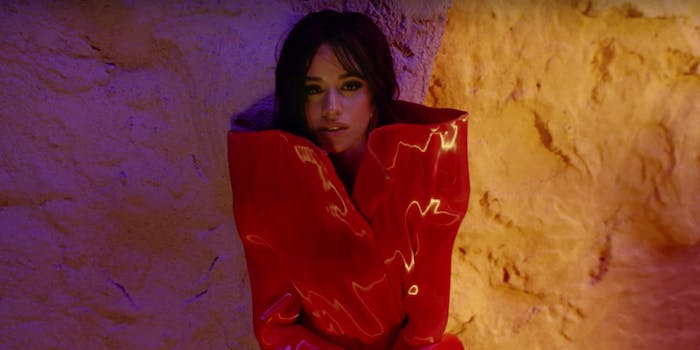 The internet turned the pop star into a spicy meme.

Camila Cabello dropped a music video for “Never Be The Same,” the latest hit off her debut solo album Camila, on Thursday. And she’s already a meme.

As fans watched the former Fifth Harmony singer’s video, in which she juxtaposed shots from homemade footage with scenes of her dressed in highly editorial couture, some of them thought just one thing: Cabello looks just like a Taki.

It didn’t take long before everyone on Twitter shared their spicy take on Cabello’s red plastic dress.

Does she also look like a bottle of ketchup?

What about a hot dog?

Perhaps the outfit most resembles the packaging for McDonald’s French fries.

What is that in my works fry station #NeverBeTheSameVideo pic.twitter.com/pUJBiiUfTq

Cabello hasn’t yet commented on the memes—but we think it’s safe to say she probably got a good laugh out of them.