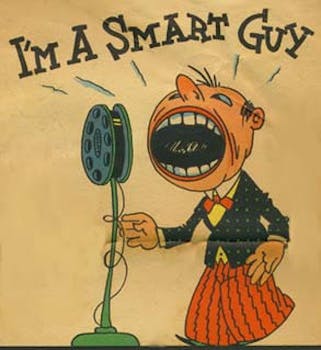 Are you really surprised to hear that there’s a correlation between the things you like on Facebook and what sort of person you are? Researchers from the University of Cambridge published a study titled “Private traits and attributes are predictable from digital records of human behavior.”

At first glance, this sounds like an update from the desk of Captain Obvious. After all, anyone who “likes” Rick Santorum is clearly less likely to support gay rights than a fan of Dan Savage, just as anyone with a tampon subscription is more likely to be female than someone from a prostate cancer support group.

Though such obvious correlations are mentioned in the study, other trends and correlations were far more subtle. In a section called “Predictive power of likes,” the study noted:

[T]he best predictors of high intelligence include “Thunderstorms,” “The Colbert Report,” “Science,” and “Curly Fries,” whereas low intelligence was indicated by “Sephora,” “I Love Being A Mom,” “Harley Davidson,” and “Lady Antebellum.” Good predictors of male homosexuality included “No H8 Campaign,” “Mac Cosmetics,” and “Wicked The Musical,” whereas strong predictors of male heterosexuality included “Wu-Tang Clan,” “Shaq,” and “Being Confused After Waking Up From Naps.”

The study went on to note that, despite the high correlation between homosexuality and the No H8 campaign, “less than 5% of users labeled as gay were connected with explicitly gay groups […] Consequently, predictions rely on less informative but more popular likes, such as ‘Britney Spears’ or ‘Desperate Housewives’ (both moderately indicative of being gay).” Other less-obvious connections mentioned in the study include an apparent correlation between Democratic political leanings and fans of the “Hello Kitty” brand.

What possible real-world uses might this study have? The conclusion notes that, on the positive side, such information could improve products and services offered to consumers, with the very huge potential downside that “commercial companies, governmental institutions, or even one’s Facebook friends could use software to infer attributes such as intelligence, sexual orientation, or political views that an individual may not have intended to share.”

On the “How does it work” page, YouAreWhatYouLike explains that “If most of the things you like are liked by liberal people […] it is quite likely that you are also liberal.”

But “quite likely” is not synonymous with “guaranteed,” which is why it also reminds everyone that “no test is 100% accurate.”

In other words: don’t assume all 8.1 million people who like Lady Antebellum on Facebook are stupid, nor that the nearly 1 million fans of Curly Fries are all geniuses. Especially not now that this study has been released and it looks like some Facebookers are trying to game the system to enhance their own perceived intelligence. The number of people who “like” the Curly Fries page has increased exponentially since the release of this study linking intelligence and curly-fry fandom. Before that, the most recent update on the Curly Fries page was on April 7, 2010, and said this:

Any correlation between that statement and high intelligence is far too subtle for us to detect, at least not without a University of Cambridge research grant.