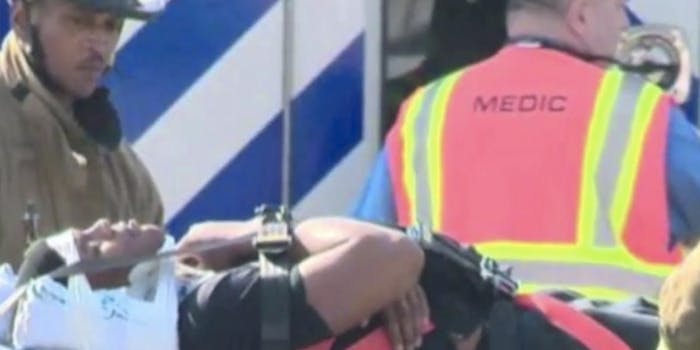 Carolina Panthers quarterback Cam Newton takes to social media to offer thanks to well-wishers after his car accident.

What better way for a pro athlete to win the hearts and minds of fans than to survive a car crash and turn it into a sympathy card?

As the Carolina Panthers struggle through a 4-8-1 season, quarterback Cam Newton has been the target of a great deal of criticism for inconsistent play and on-field theatrics punctuated with a lot of post-game excuses. Newton and the team’s fate took an unusual twist as the result of car crash involving the star player on Dec. 10 in the Uptown section of Charlotte. According to hospital reports, Newton suffered two transverse process fractures in his lower back, an injury similar to the one that shelved Dallas Cowboys QB Tony Romo earlier this season.

The immediate fallout of the accident included putting Newton on the injury list for this week’s game against lowly Tampa Bay along with an outpouring of love from fans and teammates. The former Auburn star immediately proclaimed he was lucky to be alive and reaffirmed his religious beliefs which is consistent with his previous statements of devotion to Christianity.

Using social media as a virtual get-well card, Newton fans and teammates as well as some celebrities wished him well. Only those slobs who had the Panthers’ QB on their fantasy roster had the gumption to moan about his sitting out Sunday’s game.

Thinking about our guy @CameronNewton. Football can wait just happy he is doing ok. Looking forward to seeing him pic.twitter.com/BfIc7LhZOe

1. was driving exactly the speed limit
2. was not at fault in crash
3. patiently waited at side of road for help

If you're planning to tweet anything about how Cam Newton's wreck affects your fantasy football team, log off and set your PC on fire.

What does a hospital in NC and a bunch of fantasy football owners have in common? They all released Cam Newton today!#getbetter

To all the talk about his taking a week off from the rosters of legions of fantasy football fans, Newton took to Twitter to rise above the noise.

Cam Newton: "I'm on somebody's fantasy [team], and I think it's the man upstairs."

What lies ahead for Newton and the Panthers is a scenario that could only have been scripted by Hollywood. The NFC South, the Charlotte team’s division, has fallen on hard times this season with no team playing above .500 football. The Panthers are 4-8-1, but they’re only one game behind Atlanta and New Orleans for the lead and the chance to make the playoffs. If Newton were to follow Tony Romo’s path and miss only one game, he could return and become an inspiration for his team to win its final two games. A 7-8-1 record might land the Panthers in the playoffs. From there, who knows?